I picked up a ‘quick-start’ version of this game for a pound at Firestorm Games, Cardiff and loved the look of it so just had to get the full version! If you love old-school RPGs then Dungeon Crawl Classics is a must-buy!

Check out my Play-by-Post games over on StartPlaying.Games!

I was drawn to the cover of this game immediately! Having grown up with the original D&D and AD&D books as well as Warhammer Fantasy Roleplay (WFRP) 1st edition, I am a big fan of old-school fantasy roleplaying (OSR) and I just love the art from that era! I particularly like the psychedelic feel to some of the colour illustrations. 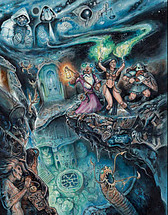 But Dungeon Crawl Classics is not just some throw-back to a by-gone past. It is, in my opinion, a RPG masterpiece! Based on Goodman’s decades of experience in game design and drawing inspiration from the best of fantasy literature, Goodman has crafted what could be considered the definitive culmination of OSR.
Goodman has taken the essence of old school RPGs and blended them with the flavor of seminal works of fiction from authors such as HP Lovecraft, Edward Rice Burroughs and Jack Vance and distilled these into a potent and heady draft fit for even the hardiest of Dwarven brewers! Dungeon Crawl Classics is simple in all the right places and complex where it needs to be. It is low-fantasy at its best and most brutal! 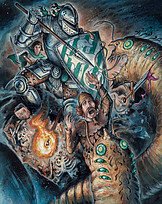 In Dungeon Crawl Classics, character generation is random. Personally, I love random character creation. I know it is not to everyone’s taste, but I love seeing how the dice fall and making the best of an imperfect character. There is no min-maxing here! You start with a nobody on Level 0 and see if you can make a hero out of them!

The attributes in DCC are Strength, Agility, Stamina, Intelligence, Personality and Luck which are mostly comparable to those of familiar to D&D 5e. Luck, however, plays an important role in DCC which is unique.

Rolling up a character is done in a similar way to WFRP, you start with the attributes and then roll on a random ‘Occupation’ table which assigns your starting careers as well as your race. Each attribute is taken as a raw roll of 3d6 so you are just as likely to be completely inept as you are to be amazing, and most likely you will pretty average. And HP is in short supply. As wannabe hero, you get just d4 HP with a slight modifier if you are (un)lucky based on your Stamina mod. 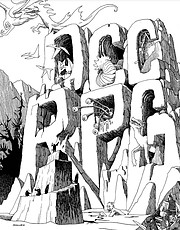 Within character creation there is a lovely mechanic where you get randomly assigned a ‘Lucky Sign’ which is a particular type of dice roll upon which you must always apply your luck modifier, which is just as likely to be negative as positive and is a function of your Luck stat. If your Luck stat is between 9 and 12 inclusive, then you have no modifier. Below 9 you get a negative Luck modifier and above 12 you have a positive Luck modifier.

The one thing you do get to choose is your alignment. The choice here is a simplified version of 5e, just Lawful, Chaotic and Neutral and this choice will affect your character’s behavior throughout their campaign.

Your character will start with two modest pieces of equipment from their occupation, one randomly assigned extra bit of kit 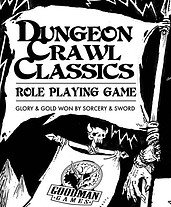 and 5d12 copper pieces. Once you survive your first dungeon and advance to Level 1, you will be able to choose an adventuring class.

The choice of classes is purposefully simple here as well. You can choose Cleric, Thief, Warrior or Wizard. You don’t get to choose a class, however, if you were assigned a race during the occupation stage. If you are a Dwarf, Elf or Halfling, then that race is your class. Each class comes with its own HP dice for Level ups, guidelines on alignment, weapon specialties, special skills and, if you are a Cleric, Wizard or Elf, various aptitudes for Magic.

One major feature of DCC is the character creation ‘Funnel. This is such an awesome concept and really brings the flavor out of the random character generation. In the Funnel, each player creates up to four Level 0 characters as per the rules for random generation above. This team then embarks upon their first quest together. PC deaths a very likely as most characters have less than 4 HP, basic equipment and no specialist skills.

The Funnel itself is a one-shot dungeon or adventure in which the party will meet a variety of traps and foes which will whittle the party down to the lucky few who make it out alive. Those PCs who survive represent the wheat sorted from the chaff, the unlikely heroes for whom adventuring is their escape from the monotony of their otherwise mundane existence among the peasants of the village.

Emerging from the dungeon, with many of their former friends having been torn limb from limb by horrors previously unimaginable, these fledgling adventures advance to level 1 and begin their journeys toward gold and glory to be won by sword and sorcery!

I absolutely love this concept and it makes for a really exciting and fun first adventure with lots of player-character deaths and memorable moments as your level 0s overcome unfavorable odds to emerge victorious! Those who do survive will have stories to tell of unlikely deeds committed in the pursuit of riches and have the opportunity, at this point, to choose a class and the associated benefits that accrue from being a Level 1 character. 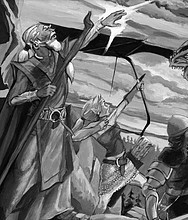 I won’t go into detail here on the classes but suffice to say that, despite the limited range on offer (at least to aficionados of 5e), there is plenty of meat on the bone in this regard with each class have some really cool special abilities. The Cleric can dispel the undead and demons with ‘Turn Unholy’ and heal their comrades with ‘Lay on Hands’ and also has access to class-specific spells and ‘Patron’ spells.

Wizards, clearly, and also Elves are able to cast magic, but magic in DCC is a risky business. If some things have been simplified in DCC, the magic system is one of those areas where Goodman has added complexity, tone and depth in ways that I love!

The magic system is reminiscent of WFRP, in that it can misfire, causing problems for the caster and his friends and a bad roll can cause the forces of chaos to corrupt the user! A lot of thought has gone into the magic section in DCC and each spell has a bunch of different random manifestations when it is cast and, depending on the level of success, different effects. 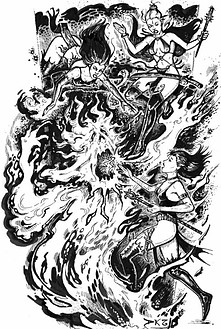 For example, the spell ‘Control Fire’, at its lowest level of success wreaths the caster in a magical fire damaging any opponents who attempt to attack them. But at its highest level of success the spell creates a ravaging wildfire which devastates the surrounding landscape! The beauty of this system is that it mechanically recreates the unpredictability of the winds of magic. In DCC, magic retains its otherworldly, awe-inspiring nature which we read about in novels and see on our TV screens.

But it doesn’t end there! If you fail a magic check then things begin to get really interesting! Failing a ‘Control Fire’ spell could result in the caster burning off all their own hair or setting fire to all their friends in a misfire. Or, worse, the caster could succumb to the corruption of toxic energies and gain permanent ailments and disabilities! For example, a consequence of corruption on Control Fire could lead to permanent scaring or persistently burning hair. And failing a spell check could result in the spell being ‘Lost’ for the rest of the day, whilst Clerics can experience the ‘Disapproval’ of their patrons.

As a result of all of this lore, each spell has an entry in the rules of at least a page long and players will have lots of fun selecting spells for their characters. And ‘Judges’ (DMs) are encouraged to turn spell acquisition into quests in their own right. All of this ensures that magic in the DCC world remains a mysterious force, worthy of the respect and reverence which it receives in the best of fantasy literature. 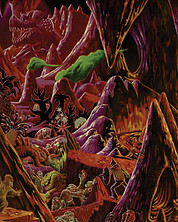 All-in-all, I love Dungeon Crawl Classics! Goodman has set the tone just right in order to conjure up the fantasy world that I grew up with. It’s quirky and fun and rich and open to all the possibilities that you might want to throw at it in terms of home-brew world-building. Character generation is quick and simple, so easy that my kids, 8 and 10, were able to roll up teams of level 0 characters for our Funnel in no time.

And the core rules is only the beginning – there are dozens of adventure modules available both for level 0 funnels and for higher level characters as well as source books for different settings, campaign aides and extra rules and a vibrant online community. Visit the Goodman Games website to find out more!

If you are a fan of fantasy roleplaying then I would highly recommend checking out Dungeon Crawl Classics!

Let me know in the comments below if you’ve played it, especially if you can recommend any particular adventure modules we should take a look at. 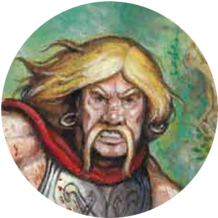