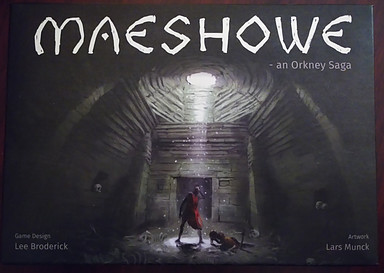 Welcome to my review of Maeshowe – An Orkney Saga. A card and resource management game which transports you back to Viking Scotland during the heart of the Middle Ages.

I previously reviewed Perdition’s Mouth: Abyssal Rift by Dragon Dawn Productions and they were kind enough to send me a copy of Maeshowe to review. It’s a great little game, so let’s get stuck in!

First off, I was drawn to this game by the setting. I love Viking mythology and spent some time in my youth studying the runes so I jumped at the chance to play a game set in that world. I had never heard of Maeshowe, however, and the sagas surrounding it so Let’s dig a little into the history of the place before we embark on our mission.

Maeshowe is a large, neolithic, chambered cairn standing 23′ high on the low flatlands of Mainland Orkney. It dates from nearly 5000 years ago and precedes both the Giza Pyramids and Stonehenge. It is reminiscent of both Newgrange in Ireland and Silbury Hill in Avebury. Like Newgrange, it is aligned with winter solstice so that the central chamber is illuminated by the setting sun. [Image credit #1]

Julian Cope (of Teardrop Explodes) wrote about Maeshowe in his megalithic masterpiece, The Modern Antiquarian. He 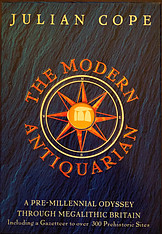 describes it as a remarkable specimen of architecture being built of huge Orcadian flagstones, so expertly cut and placed that, even without the aid of mortar, you could not pass a knife between the stones.

As with most megalithic sites, Maeshowe’s true purpose and the practices of our ancestors surrounding the mound will be forever lost to antiquity, but there is an interesting intersection with Viking history which adds a whole new level of intrigue. Maeshowe is mentioned twice in the Orkneyinga Saga which was first penned in the 12th Century and which is the only known Medieval chronicle to have Orkney as its setting.

The first Viking to arrive at Maeshowe was Jarl Rognvald Kali Kolsson who was a Norwegian of some notoriety. He came to Orkney to be Earl (Jarl) and brought with him innovations in not just the runic language, but also Skaldic poetry. Rognvald and his men apparently broke into the cairn and stole some treasures which they found there.

Three years later, Jarl Harold Maddadsson and his party took refuge in Maeshowe during a snowstorm, during which some of his men were driven mad by the darkness and, perhaps, by their own superstitions – or worse! [image credit #2] 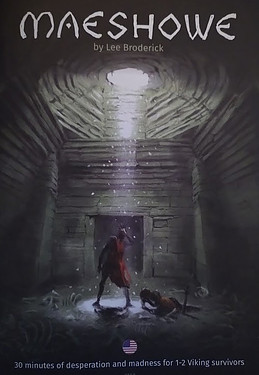 Now imagine you are a wandering Viking Jarl, lost in a blizzard, desperate for shelter. Starved and half frozen, you stumble across a mound in the plains. Somehow you break a hole in the top and drop 20 feet into utter blackness. Your relief from the storm is short-lived, however, as you come to realize that you are now trapped in an ancient tomb. Your supplies are low and the only way out is to dig with your bare hands. And the creepy darkness is beginning to play tricks on your mind!

And so the scene is set for your first adventure in Maeshowe! The first thing I noticed is that this is a small game, so great for taking on holiday. The second thing I noticed was the amazing artwork! Lars Munck has really captured the claustrophobic feel of being trapped in an ancient tomb with his dark, beautiful, often macabre, paintings which evoke the horrors of being trapped underground!

The game is very well produced with high-quality cards, a simple yet elegant board, and robust playing pieces. The rules come in four languages, English, French, Italian and German and give a little background and lay out the instructions clearly and precisely. The board is reversible, with one side for solo play and the other for the two-player coop version. 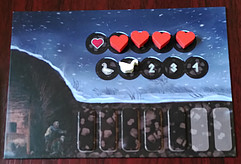 On the board you track your health, with Heart tokens, and your food, with Geese tokens, as well as your progress with the escape by excavation. It is super quick to set up and there are varying levels of difficulty so you can set the degree of challenge which suits you. Difficulty is determined by the number of Passage Tokens you place at the start. For solo play, three passage tokens is ‘Easy’, four is ‘Medium’ and five is ‘Hard’. After my first couple of play-throughs, I always play on ‘Hard’ mode!

Game play is very simple, but you will have tough decisions to make at every point! You start with five cards in your hand 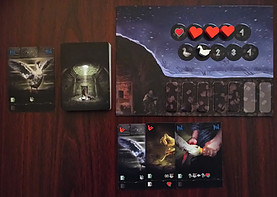 and each turn you must play a card to the ‘Row’ and discard a card. The Row is the space in front of you where you place your cards so that you can see the previous cards you’ve placed. The discard pile works in the traditional manner. Once you have resolved the actions for both the cards you played you draw back up to five cards in the hand.

So hand management is crucial to your survival! You will need to plan very carefully which cards you will be playing to the Row and which you are discarding and when, for a couple of wrong moves and you will quickly find yourself perishing to the darkness! 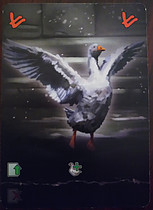 Each type of card has its unique effects and some will help you like ‘Goose’ which gives you one extra food token when played to the Row and, very helpfully, has no action when discarded. Some cards, however, are just bad news! For example ‘Passage Collapse’ which will cause you to lose one health when discarded and, if played to the Row, you lose two health and add two Passage Tokens – in most games this would be sealing your own fate so you would have to be very foolish or desperate to play this to the Row!

Each card also has a rune in the top corners, either red or blue, just like the Excavate cards. If, after drawing back up to five cards, you find you have five of the same colour, you go ‘Mad’! Now this is not necessarily the worst thing in the world. Going Mad means you lose one health and discard your whole hand to the discard pile, shuffle the discard pile back into the deck and draw back up to five cards. And as long as losing that health did not kill you, you can actually use going Mad tactically to retrieve cards from the discard pile. Use wisely, though, for you can only go Mad once per game!

There are eight types of cards in the core deck and this is enough to keep you entertained for some time, but when you begin to include the expansion sets into your deck, things begin to get a lot more spicy! There are 12 different types of expansion cards, all of which come with the game as standard, and there are some suggested set-up changes for when you use certain cards.

The expansion sets have cards with slightly more complex and interesting actions and combinations. For example ‘Hope’ and ‘Horror’: ‘Hope’ can be used as a wild Excavate card, blue or red, whilst ‘Horror’ has both the red and blue rune on counting for either when checking for madness! And again, the artwork on these is excellent!

I won’t go into detail on all the cards that are available, I will let you explore them all for yourself, but to suffice to say, playing around with combinations of expansion sets has kept me entertained for a whole week whilst I had Covid! And if you want to really test your mettle, once you are familiar with the effects of each of the cards, I would recommend chucking in all the expansion cards into one mega deck and trying your luck – it can get pretty intense!

So I really like this game and if the developers are considering a second edition, I’d like to suggest a couple of ideas. Firstly, I would like to see the card names printed on the cards themselves. I totally get why they aren’t, devising a game which can be played in any language excludes words on the cards for the most part. So, if the budget could extend to separate print runs for each language then this is something I would like to see. The reason is that, especially for the first few games, I found myself referring to the rule book constantly trying to match the picture to the description which felt less immersive than I’d have liked. Once I was familiar with the cards this became less of an issue.

The second thing I’d like to see is a three-player version. I don’t see any reason why this couldn’t be extended to three players, there would probably have to be more cards in the deck and an extra or bigger board, but I think that would be cool.

And the third suggestion is really minor, but I’d like a little token or meeple to move along the passage as we excavate through it. It’s a little thing, but it would make me happy! 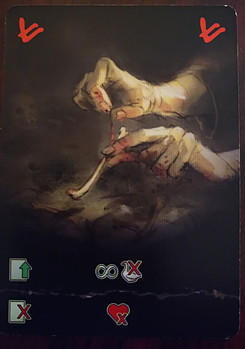 All-in-all, I love this game! It’s quick to pick up and has lots of variations to keep it interesting and it’s portable which is really handy! The artwork is amazing and really helps with immersion into the setting. I love that Lee Broderick has taken this little slice of the lesser-known history of the Orkney Islands and turned it into this fun, strategic little card game. It is entertaining and challenging and just as fun solo as with two players and although it says 12+ on the box, my eight-year old really enjoys it!

When I was playing it solo, it felt familiar, like a much better and strategic version of Patience. And as I was researching it, I found that Broderick actually released a print-and-play version of the game back in 2016 which was played with a regular deck of cards, so that kind of made sense!

Anyways, I would thoroughly recommend checking out Maeshowe – An Orkney Saga, a great little solo or two-player cooperative game within a cool Viking-cum-megalithic setting!

Check out the original 2016 version here!

And as always, thanks for reading! If you have any questions or comments please leave them below, especially if you know of any other cool games in a Megalithic or Viking setting! 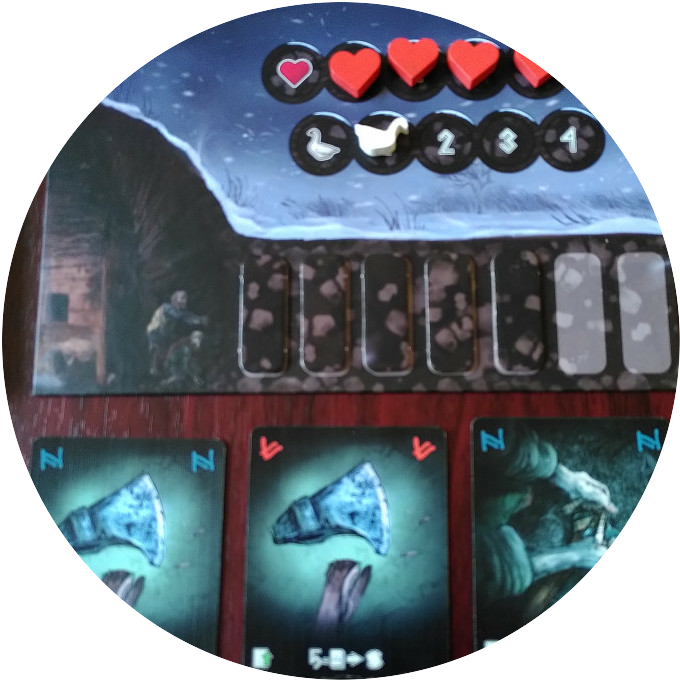 And if you want to find out more about the real Maeshowe, check out these links: