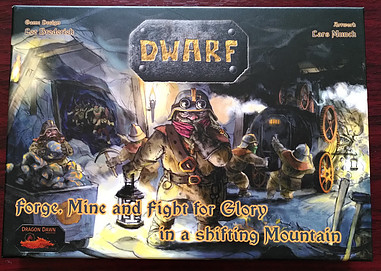 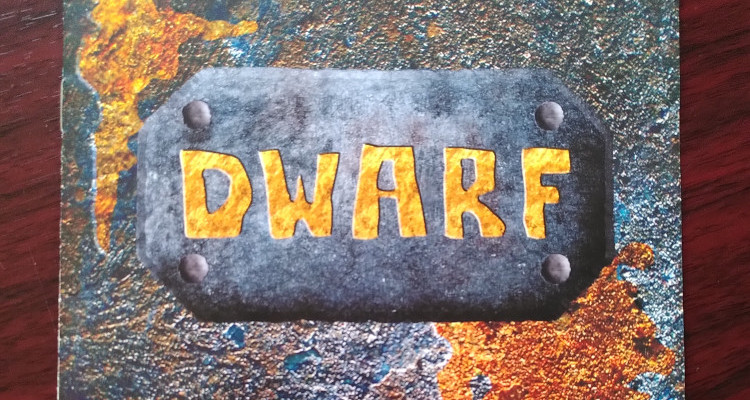 Welcome to my post on Dwarf, the awesome little card game from Dragon Dawn Productions.

A big shout-out and thank-you to Dragon Dawn for sending me Dwarf to review, and without further ado, let’s get stuck in! 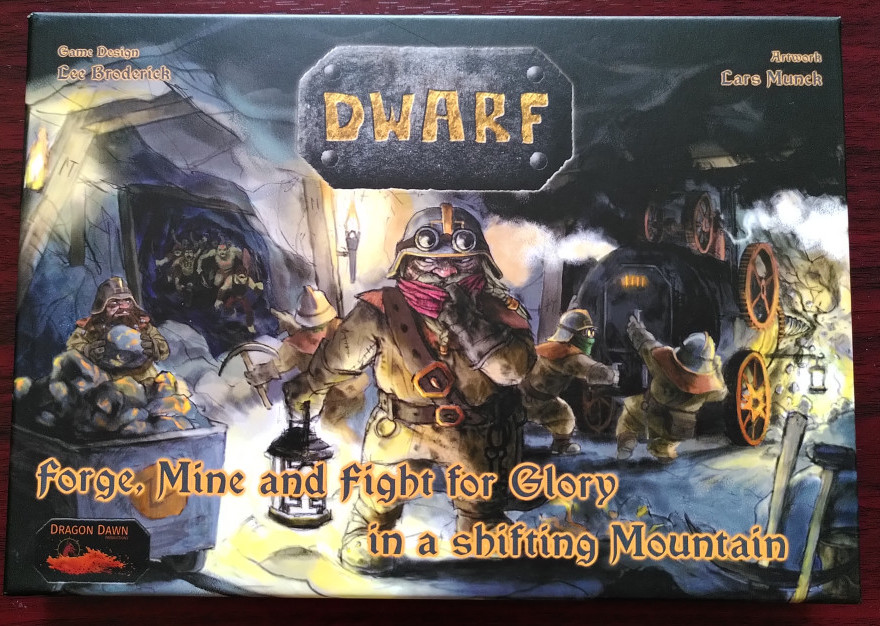 Dwarf is a cool little worker placement card game for 1 to 3 people, although with two sets of the game, you can play with up to 5 players. In the game you take on the role of Dwarfs mining an ever-changing mountain scene for precious metals, forging valuable items and defending against a host of monsters who are lurking in the darkness! 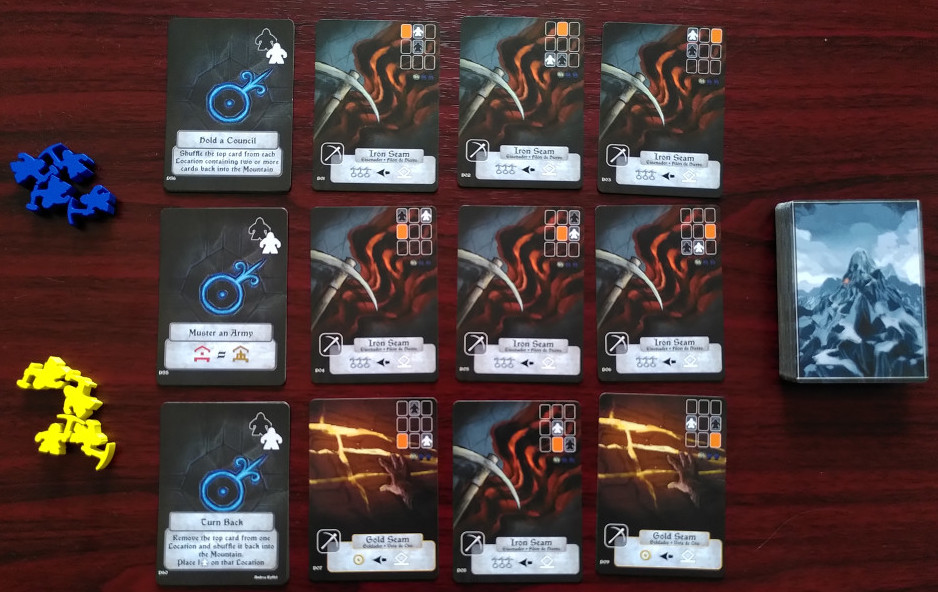 The game-space consists of a grid of 9 cards laid out 3 by 3 which represents the ‘Mountain’. Each player has four Dwarven miners in the form of really cute meeples. Two are your regular miners and the two with long pick-axes are your ‘Extra’ miners who you can play when you take the ‘Get Help’ action.

Players take turns placing meeples on the cards which give a variety of actions and the aim of the game is to gain the most resources in at least two of the main resource types. You will be mining iron and gold, smelting iron into steel and forging items along the way.

Each turn, you draw ‘Mountain’ cards and place them over the cards in the grid, so the set of actions available is constantly changing. There are also some special actions which can dramatically change the the game-space or give you an advantage in other ways. 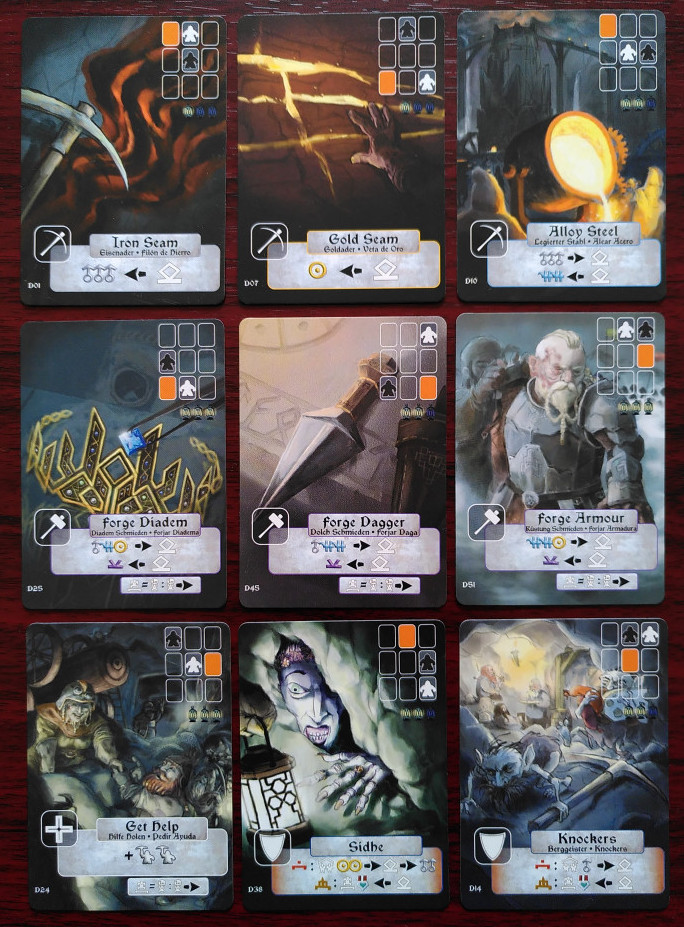 The cards currently in the ‘Mountain’ each represent a ‘normal’ action you can take. Depending on the cards out each turn, the normal actions you may be able to choose from are ‘Mining’, ‘Forging’, ‘Defending’ and ‘Get Help’.

There are three mining actions you can take which are: Mine 3 Iron, mine 1 Gold or smelt 3 Iron into 2 Steel which, for the purposes of the mechanics, counts as a mine action

Forging involves using the resources you have mined to craft works of either art or war. You can Forge armour, weapons or decorative pieces such as the ‘Diadem’ or a Crown. Each time you forge you receive an ‘Item’ token which is one of the main resources used to decide the winner at the end.

You will also need to Defend against various evil forces lurking in the mountain which are out to steal your resources or otherwise interfere with your progress. There are five types of creature to be wary of, the first are the ‘Knockers’ who steal one iron. These can often be tactically ignored as they are a minor inconvenience. Then you have ‘Orc Raiders’ who, if they are not Defended against, stop all players from mining. You also need to watch out for the ‘Dragon’, the ‘Sidhe’ and the ‘Great Dragon’, all of whom are after the players’ Gold! 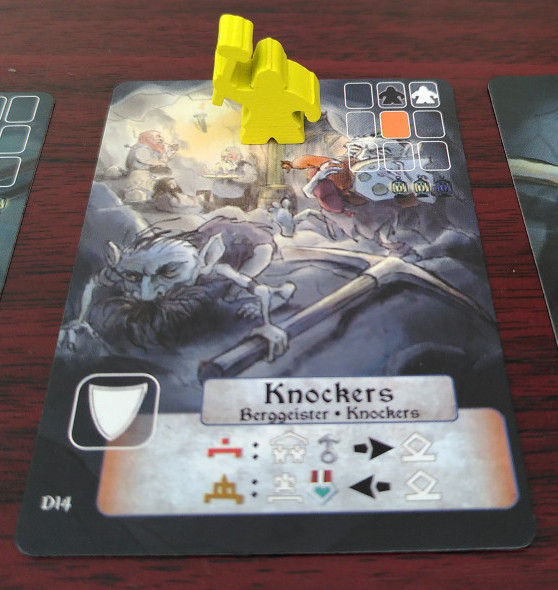 Defending is an action which is taken by placing a meeple on the monster card thereby blocking the monster’s action and also earning the defending player a ‘Medal’. Medals are a tie-breaker resource at the end, used to determine the winner if there is no out-right victor from Steel, Gold and Items. Medals can also be spent to make taking a ‘Special Action’ cheaper. More on this below.

The final normal action is ‘Get Help’. This is a super useful action allowing you to place your two Extra Helper meeples onto the board, effectively doubling your actions for that turn.

There are several nice mechanics in this game which set it apart from other, similar games I have played. The first is the meeple placement order. 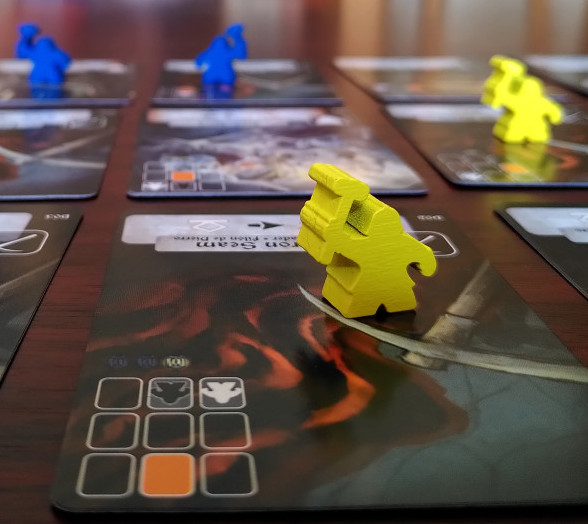 One player begins with the ‘1st’ player token and places their meeple first, thereby getting first pick of the actions. Play then continues clockwise with each player playing their first meeple.

Once everyone has placed their first meeple, the players then place meeples in reverse order, starting with the player who went last. This is a nice mechanic as it balances out the benefit of going first by forcing the 1st player to be last for the placement of their second meeple.

The 1st player token is handed to the left whenever the first player picks either a ‘Get Help’ action or a ‘Forge’ action. So again, the balance is built into the game by rotating poll position each time the first player takes a powerful action. This ensures that everyone will be the 1st player several times during the game.

Lee Broderick also has devised a host of special symbols which, once you get your head around them, are really helpful. This allows him to save space on the cards and make some of the cards less language-specific.

This is a nice mechanic if you want a game that excalates in tension, but all your plans may still go ary if someone uses one of the Special Actions!

The Special Actions are another great mechanic. These took me a few plays to get my head around. At first, they seem overly expensive: A player can use both their regular meeples to activate a Special Action and, to me, few of them seemed powerful enough to warrant foregoing all my normal actions for a turn. If a player spends four medals, however, then they can place just one meeple to activate a Special Action. And when combined with Get Help, this makes for some strong combos!

There are nine unique Special Action cards, placed in three piles of three at the side of the play area. This means that only up to three Special Actions are available at any one time. The effects of them range from hugely beneficial through cleverly strategic to the outright chaotic!

Beneficial Special Actions include buying or selling an item, being able to place your meeple on a card already occupied by another player and ‘Muster an Army’ which makes all monster locations count as defended. The strategic ones enable you to rearrange the cards in the location stacks in order to change the action at that location and ‘Run Amok’ means you shuffle all the cards in each location, completely changing the state of play!

When you first start, I would recommend reading these cards carefully, getting to know the symbols used on them and reading the rules regarding them closely as this is probably the most complicated aspect of the the game.

So with the basics under our belt, how does it play?

Well, Dwarf is a really fun game! The turns go fast, even with three players, and the ever-changing cards means that no two turns feel the same.

The game stays fresh and amicably competitive throughout the game. The tables can turn quickly as one player over-spends their resources to buy items, or another sells an Item for 5 Gold.

And there is a nice balance of competition and cooperation. You will often find yourself working together to defend against the monsters, but occasionally you will want to be sly and leave your competitors high and dry, and the Special Actions can really throw a curve ball in there too! 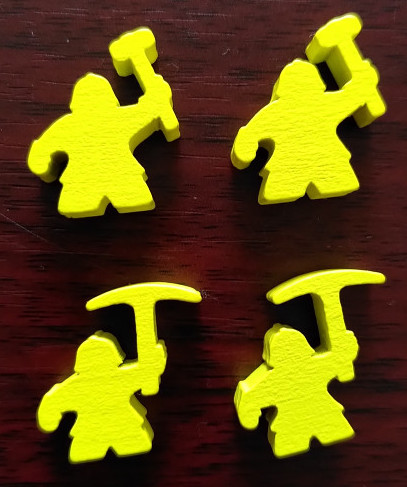 As you play through a few times you will begin to build up some tactics which are not immediately obvious. I really like this about the game. Dwarf is conceptually simple but with some deeper levels of strategy which take time to master. And it is quite a social game. I found that we would be talking constantly throughout, each trying to figure out our best courses of action and negotiating who was going to defend against the monsters.

There is very little downtime during Dwarf, the alternate meeple-placing mechanic means there are usually only a few seconds between each decision so it can keep the attention of those who get bored with long waits between turns. My daughter, 10, is one of these people and she loves the game!

I’m really impressed with what Lee Broderick has done with the solo mode for Dwarf. In solo mode, you play against a dummy opponent which is governed by a clever set of algorithms which are built into the card design. 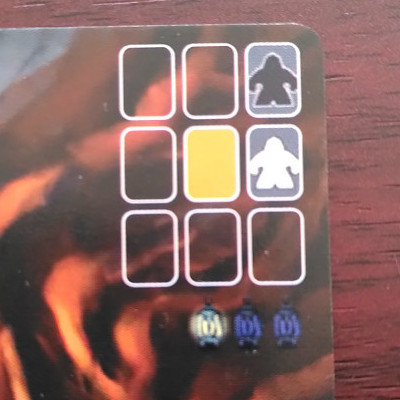 Each card has a diagram of the play-space with one card-slot highlighted orange. This is where you place the card in the mountain. There is also a black and a white meeple icon on the diagram. The second card you draw each turn determines where the A.I. player places their first meeple – they place their first meeple on the space represented by the black meeple icon.

You then take your turn and the card you place your meeple on determines where the A.I. places its second meeple – It goes where the black meeple is on the card you chose, and if that space is not available, it goes for the location of the white meeple. This is such a great mechanic as there is a good balance between randomness and the player’s ability to influence the outcome.

Hard decisions need to be made every turn as you will want the A.I. to go to certain locations but that means choosing your meeple placement very carefully. You will need to balance your desire for glory and gold with the A.I.’s opportunities and be very strategic.

There are also three levels of difficulty in solo mode, each with slight adjustments to the algorithm to add extra challenge. For example, in easy mode, the A.I. is at the whim of the card icons, but in level 2 and 3, it begins to be more tactical in its choices. At level 1 you can force it to take useless actions, but at higher levels this is not possible and it will seek out better positions making it more of a formidable opponent.

Lars Munck has delivered again with some gorgeous and atmospheric art for Dwarf. The Cover art has a cool fantasy-cum-steam-punk feel and the card art is great, especially the Great Dragon.

All the materials are of a high quality, with robust cards, wooden tokens and sweet little dwarf meeples.

I have a few suggestions for future editions of the game. The first is more variety in the Special Actions deck. I’d like to see more special actions which allow you to increase your yield or screw-over your opponents!

My other two suggestions are very minor, the first is that the 1st player token is not a proper token, just a disc that one has to stick the 1st player sticker on. It’s the only piece which is of a lesser quality than the rest of the game. It makes no difference to game play, but it would be nice to have a proper token for it.

The last suggestion is that the box needs to come with more Medal tokens, perhaps some representing 5 medals as I often had to substitute other things for the Medals as I frequently ran out.

To summarize, I love Dwarf! Dwarf is a small game which definitely punches above its weight in terms of brain-work. It is compact enough to travel with, easy enough to teach my kids and strategic and frenetic enough to keep you on your toes for the full duration of the game.

Dwarf is a fast-paced, quick game which has several layers of strategy to explore. It is also very flexible, being an excellent solo game and just as good with 2 or 3 players. And the dwarf meeples are so cute! – Highly recommended! 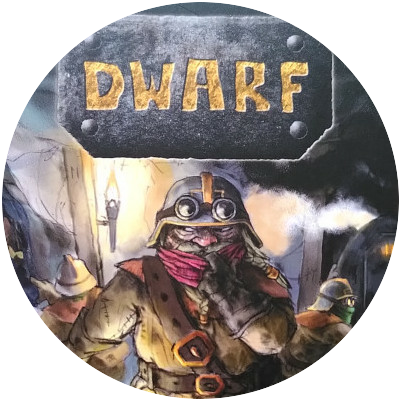 You can check out my reviews of other Dragon Dawn Production games here:

2 thoughts on “Dwarf, The Card Game – by Dragon Dawn Productions”