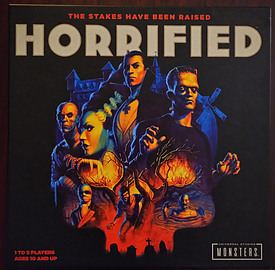 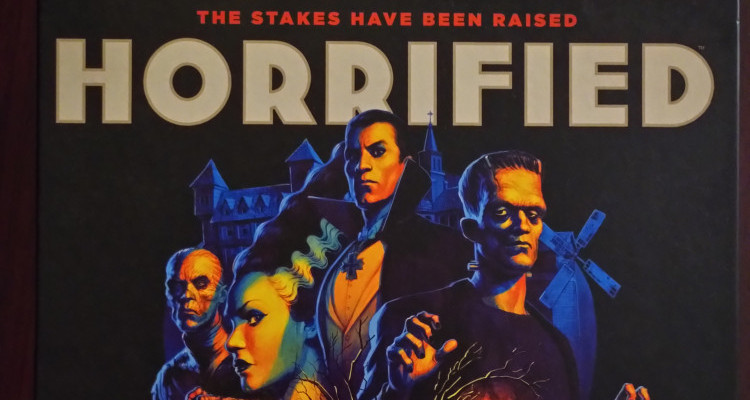 Welcome to my review of Horrified the board game!

Horrified is a coop game for 1-5 players which pits your skills against Universal Studios’ classic movie monsters!

Let’s get stuck in!

I picked up Horrified using a voucher I got for my birthday and I wanted to get a fun game which my family would enjoy. Horrified definitely delivers on that!

Firstly, the artwork is great! I love the box art which instantly conjures up the early 20th Century era of horror movie history from which the monsters are lifted.

The board itself is gorgeous and has this cool message on the back, inspired by the intro to the original Frankenstein movie, which you see when you open the box. The playing space is designed to resemble an early 20th Century town and has all your classic horror locations on there. You will be visiting a mansion, a church, a tower, a laboratory and many more sites in order to collect items, rescue villagers and battle monsters! 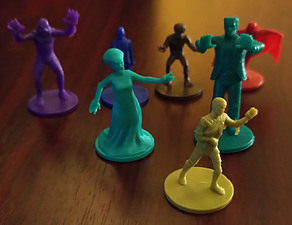 The Horrified game materials are really high quality and well-made. The monster minis are really cool and are crying out for a lick of pain, if one is into that sort of thing!

The villagers and heroes are standees, not minis, which at first I was a bit disappointed by, but actually, when I came to assemble them, I could see that they are made out of very high-quality card and are finished nicely and the artwork is cool, so I forgave Ravensburger for not giving me more minis! I would still like more minis though!

All the components are nice to handle with the hero cards being finished in a lovely matt (possibly silk) laminate. Everything is clear to read with a simple but effective colour scheme. 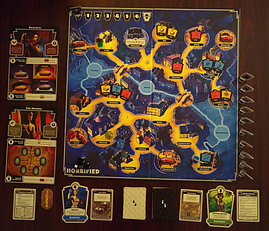 Set up is really quick. The rules suggest randomly choosing your heroes but you are welcome to choose and there is a nice selection. You have a decent range of movie tropes to choose from including the Inspector, the Archaeologist, the Explorer and the Scientist. They all have 4 regular actions and a Special Action except the Mayor who has 5 regular actions.

Most of the special actions allow you to move around the board in useful ways, but the Scientist allows you to +1 strength to any item you use. The Archaeologist, however, allows you to pick up items from an adjacent location which can be really handy as it means you can save your movement which is limited. 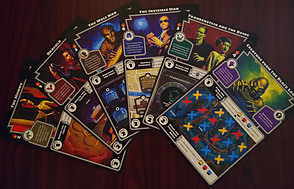 There is a really cool selection of monsters to choose from, each with its own Monster Card and special rules for how to defeat it. Monster selection is how you can moderate the difficulty of the game as well which is a neat mechanic. The rules recommend you start with just the Creature from the Black Lagoon and Dracula so your first game is not too challenging but you can ramp up the difficulty by including up to four monsters!

The other monsters on offer are Frankenstein and Frankenstein’s Bride, The Invisible Man, The Mummy and The Wolf Man. The art on each card is awesome and I love the difference mechanics that each monster, and each combination of monsters, brings to the game! 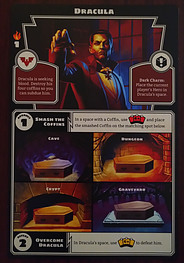 In order to defeat a monster, you need to complete its task first. This is a really cool mechanic as each monster has a unique task which takes a certain tactic or level of planning in order to complete efficiently.

For example, in order to kill Dracula, you need to destroy all of his coffins first. The Mummy has a neat little puzzle that needs solving and in order to be in a position to defeat the Creature from the Black Lagoon you need to maneuver your boat to his hidden lair using the item tokens you collect along the way.

The tasks all require certain strength items or certain colour items to complete and you must be in the right location in order to perform them. This means you will be darting around the board, collecting items and trying to complete the tasks with the monsters running amok throughout the village.

It is a race against time because, as the game progresses, you will find more and more Villagers appearing who will need shepherding to their safe locations. Each of these is vulnerable to attack from the monsters and every time a Hero or Villager is hit the Terror Level increases by one. If you reach a Terror Level of 7 then you have lost and the Monsters will continue to ravage the place!

Once you have completed the special task for a monster you are then free to defeat it using the specific combination of items required. Some are harder to kill than others. Dracula only needs yellow items with a total strength of 6 or more, whilst the Mummy requires a total strength of 9. 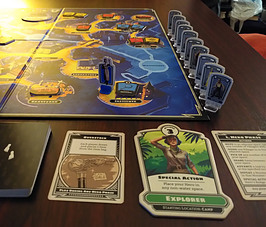 Horrified is a really quick game to pick up. Lots of people have likened it to Pandemic, but it is much simpler and easier to learn. It’s not necessarily easier to win, however, as I have had several games where we failed to defeat all the monsters!

The game is turn-based with a single player using all their actions during their ‘Hero Phase’, followed by a ‘Monster Phase’ before the next player goes. The turns are quick and players can be involved in each other’s turns so there is not a lot of downtime between turns.

This is a good spread of options which allows a decent level of strategy to evolve and plenty of conversation with your teammates regarding tactics. Any player can use their Perk cards during any other player’s turn and the active player can even use an action to allow two other players to share items.

All-in-all, I was really impressed with Horrified. For a game with a relatively simple set of mechanics at its heart, there is a surprising amount of depth to it. The large number of combinations of Heroes and Monsters available means that it will feel fresh still after many plays.

I first played the Novice level, as recommended, with just The Creature from the Black Lagoon and Dracula. I played solo and won pretty easily. I was worried after this that the game would be too easy but I immediately lost my next two games with player counts of two and three!

After a few games I grew to really love Horrified! The monster’s tasks are really fun to try to complete together and the combinations work really well, with each monster pairing bringing unique elements to the game play.

Whether you already know you really like Co-op games or if you’re interested in trying one for the first time, then I would definitely recommend Horrified. The rule set is really clear and easy to learn and the extra rules for each monster are very accessible.

Although the game is not actually scary in any sense of the word, the tension does build climatically as you watch the Terror Level rise and desperately attempt to prevent the Villagers from getting munched! Certainly many a fun hour will be had with the family or with friends and I think this game will appeal to seasoned veterans of the tabletop as well as newbies to the hobby!

Buy Horrified here! – US
Let me know in the comments below if yo’ve played Horrified and what you thought of it. Tell us what your favorite horror-themed or co-op games are so we can check them out too!

If you like Coop games take a look at my top 2-player Co-ops! 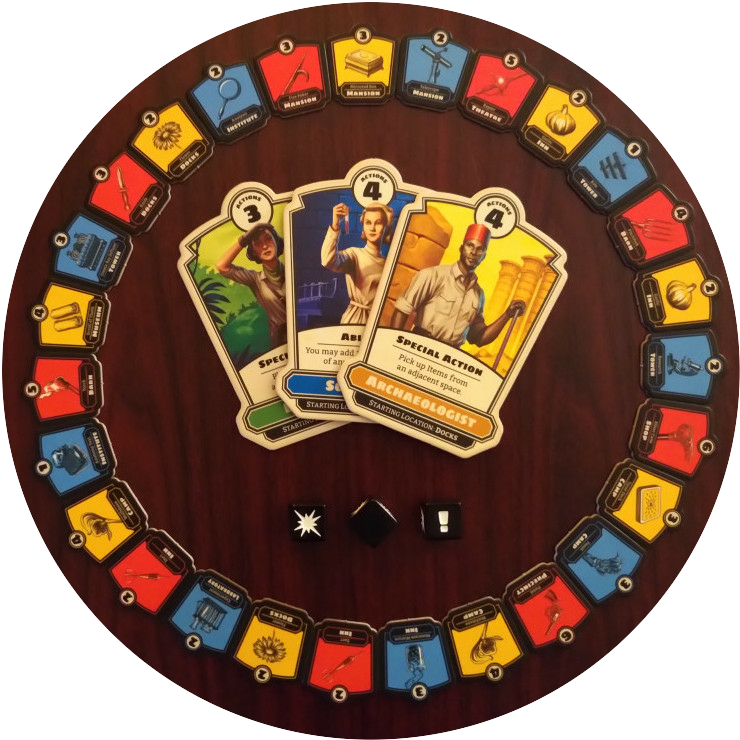 Or if you are into horror games, check out my Zombie board games recommendations!

2 thoughts on “Horrified the Board Game – Review”