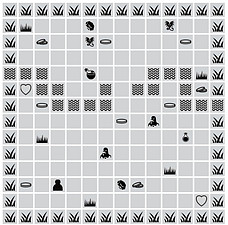 So a couple of days ago, David David from grumpyspider.com (@ddaviddx2 on Twitter), sent a shout out for play testers of his new game which he described as a “solo-only, campaign-driven, point-and-write dungeon crawler”. I jumped at the idea, even if I didn’t have a clue what a ‘point-and-write’ game was!

David graciously sent me a prototype of his new game and I gave it a whirl. Here are my thoughts about it!

The game is called Pocket Book Adventures and is a mini-dungeon crawler game played with a pencil. I loved the concept immediately. I grew up with PC games like Rogue and this is like a pen and pencil version of Rogue with a better narrative!

The version I got was print and play but David apparently wants to print the game in a pocket-sized ring binder which I think is a great idea. I love the idea of a small, easy to transport dungeon delver which you can keep in your bag, or pocket and take out for those moments when you’re waiting for the train or hanging around whilst your kids do a club. Little games like these are great for helping us break our smart-phone addictions and giving us a screen break.

The main novelty of Pocket Book Adventures is the unique ‘point-and-write’ mechanic. This is where to decide movement and to battle monsters, you aim your pencil at a target and the outcome is decided by what area of the target you land on.

I was skeptical at first, I’ll have to admit. My ego was telling me that my amazing dexterity skills would allow me to hit the

bulls-eye every time! But actually when it came to it, it felt like there was a good balance of randomosity and skill involved. I found that I could definitely aim for the quadrant I wanted but I couldn’t guarantee a high movement score. And if I aimed for the bull, well, I was just as likely to get a quadrant I didn’t want. After a few games, it felt like rolling dice but better. Being able to influence the outcome a little meant I felt I had a bit more agency than simply being at the whim of the random. At the same time it did not feel like I could just cheat and chose my outcome.

So I warmed up to the ‘point-and-write’ mechanism after a couple of levels. I wonder if there could be optional rules for combining 2D4 to achieve a similar outcome for people if they really don’t like the point-and-write. Personally, however, I think it is a nice mechanic which keeps the game free of paraphernalia and is a bit less random than dice which could be frustrating as there is no way to influence the result.

I do think that the length of one’s pencil has an impact though. The longer your pencil, the more random the outcome – at least so it seemed to me!

I had no problem reading the rules or understanding them and, once I got going, I only had to refer back them once or twice. They are clearly laid out and easy to follow. They start by explaining the ‘point-and-write’ mechanic, outlining the campaign area and describing movement. They then go onto describe the other icons you will meet as well as combat before wrapping up the final elements such as recording your progress and moving from one area to another as well as what to do when you die.

As well as terrain elements, which interrupt your movement, and enemies to fight, during your campaign you will encounter hearts which heal you and coins which you add to your gold total. One feature which I really liked was the ‘Inn’ which you encounter between adventures. This is a great touch and allows you to spend your coin on further healing, stock up on potions and purchase weapons to help in your quest.

My only frustration was that I never seemed to have enough money to make full use of the services on offer. I did heal myself and buy some ‘Boot Cleaner’ but I never had enough to buy a weapon which would have been sweet. 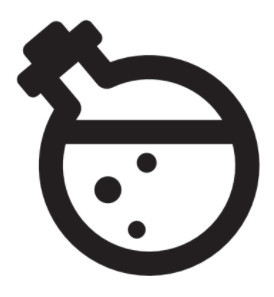 The point-and-write mechanic comes into its own during combat. The basic concept is the same as for movement: Aim your pencil at the target and see where it lands. Here the bulls-eye means you take no HP damage, the inner ring 1 HP and the outer ring 2HP. But there is a clever twist here. David uses shading on the targets to activate different events. So not only might you take damage, but you may also gain a gold due to a goblin’s ‘Fumble’ or gain a ‘Status Effect’ such as ‘Sludge’ on your boots from a ‘Slime’ monster which slows you down. This mechanic seems to work well, I probably triggered a monster special effect just under 50% of the time.

This aspect of the game would be harder to reproduce with D4s and would require outcome tables in addition to the targets which would have a knock on affect in terms of layout and space required. Combat is quick and seems pretty balanced. I died twice across 5 maps, the last very dramatically as I managed to kill the Orc at the same time!

Death is not permanent, as you respawn immediately but lose half your gold or drop any items and weapons you are carrying so it does not interrupt play much. Each time you kill a creature you gain 1 experience point (EXP) and as you level up you max health increases. I got to level 6 over my 5 maps and I really enjoyed seeing that the big boss at the end had several health points to give more challenge.

I have seen only a prototype which had 5 maps within. The art-work is super basic on purpose, but I like the Rogue-like feel to it. The current art-work is placeholder images taken from game-icons.net 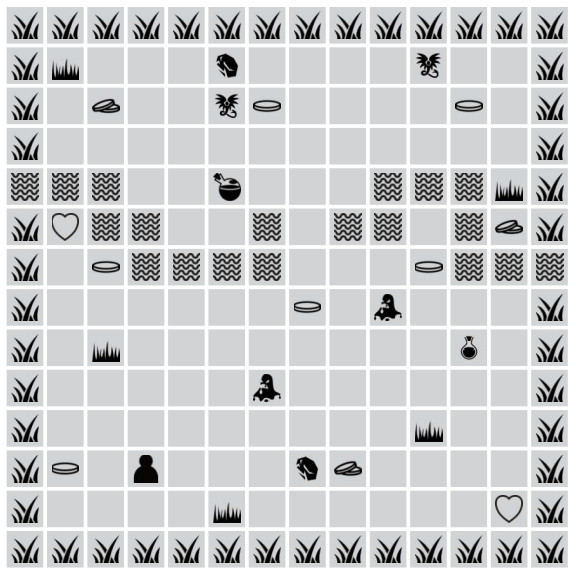 which means there is a decent re-playability to the game as I want to go back through and try to reach some of the areas I missed the first time through.

You get a maximum of 20 moves per map before you have to leave and go to the next area. This keeps the game moving, but I wonder about the narrative element of this. I wonder if David has experimented with having a target to reach before you can leave. For example, an exit such as a door, an objective to reach or a gap in the boundary to the next area. I think this might feel more like I am traveling from one place to another rather than just teleporting in and out.

I absolutely love the narrative element to Pocket Book Adventures! David asked me if I found it too goofy or forced. I don’t think it is either! It is definitely not trying to take itself too seriously which I like, but it doesn’t feel either goofy or forced.

The narrative definitely makes Pocket Book Adventures feel like a story-driven campaign and I think the game would lose a lot if it were removed. In fact, I would go the other way – I would love to see more narrative included to make the experience even more immersive. I can even imagine a few choices being included. For example, perhaps I could choose which route I take from one inn to another, or I could choose one of two missions to complete: “If you want to rescue the princess first, go to Map 5, if you want to explore the abandoned temple, go to map 6”. I would also like to see a world-map at the beginning of the book/PDF of the place I am exploring so I could see my progress across the area.

I think that Pocket Book Adventures has a lot of potential! It has such a simple concept and bunch of mechanics at its heart but the possibilities are endless. I can imagine lots of exciting new locations, cool monsters, new weapons and potions and magical treasure that can be found, I can’t wait to see what other things David has in store for this game!

Finally, I would like to sign off by extending my thanks to David for letting me play-test Pocket Book Adventures. I had a great time playing it and look forward to seeing how it develops between now and the final product.

If you want to find out more about David, check him out on Twitter: @ddaviddx2 or visit his website: grumpyspider.com

I will update this post when I hear that Pocket Book Adventures is ready for release!

And as always, thanks for reading and let me know in the comments below if you like the sound of Pocket book Adventures or if you have played any similar games!