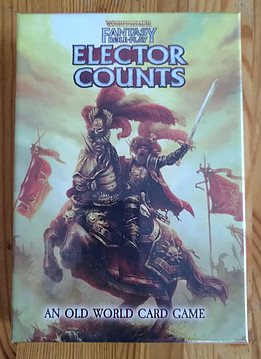 Welcome to my post about the brand new stand-alone card-game from Cubicle 7, Elector Counts, which is set in the grim and perilous world of Warhammer Fantasy Roleplay. This game has only just been released and I was lucky enough to pre-order it last July and it arrived this week so I’ve been very excited to give it a test-run!

As a stand-alone game you don’t need to have the Warhammer Fantasy Roleplay (WFRP) core rules, or indeed to know anything about the setting and if you don’t then maybe this game will pique your interest! Warhammer Fantasy Roleplay is my favorite role playing game (RPG) and it is set in the dangerous Old World which will feel reasonably familiar to fans of Lord of the Rings.

It is a low-magic, low-fantasy and high-risk world where human’s have carved out an Empire for themselves nestled between Skaven strongholds and green-skin outposts. The ever-present threat of chaos lurks in the shadows and forests of the Empire and within the myriad of strange cults who permeate every level of society.

Humans have forged alliances with Halflings, Elves and Dwarfs against the encroaching evil and in WFRP you take on the role of lowly adventures out to seek their glory. But with disease, corruption and horrors at every turn, WFRP is known for its gritty feel and relatively high player-character death count!

Now, with a little bit of Old World lore under our belt, lets take a look at Elector Counts!

In Elector Counts players take on the role of members of the nobility during a time of civil war. Each player must defend their settlements against the armies of competing Elector Counts and attempt to control the most locations by the end of the game. 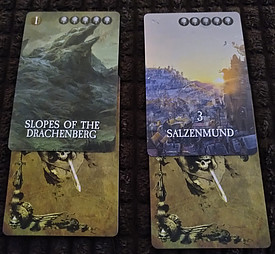 Played with 2-4 players, it is a card game where careful management of one’s hand is paramount. Relatively simple in design, the complexity comes in the strategy one must employ in order to come out on top. It is designed to mimic the card games played by inn-goers across the Empire and is as fun as it is frenetic!

Each player begins with a Starting Location, the names of which will be familiar to Warhammer Fantasy fans. Randomly you will be assigned either Aldorf, the capital of the Empire, Middenheim, the great fortified city, Ubersreik, an important trade center or Salzenmund, the capital of the province Nordland.

There are over 100 cards in the deck comprising Location cards, Attacker cards, Defender cards and Support cards. Each card has an individual and beautiful piece of artwork on it, of the type that WFRP is famous for, and the legacy of which Cubicle 7 has kept alive and built upon. So right from the get-go this is a gorgeous game to play. But it is the mechanics which make it a great game!

On your turn you may make as many actions as you are able to. You can play a location card which earns you schillings; you 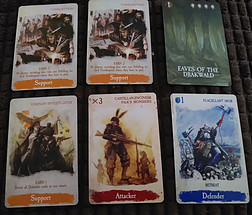 may place defenders on your existing locations or attack other players’ locations; you can play Support cards which help you or hinder your foes and your other actions revolve around hand-management.

One really interesting mechanic of the game is that at the end of each turn you must pass 3 cards on to the player on your right. This makes for some hard decisions to be made, you need to make sure you don’t give your best cards to your opponents but nearly all the cards are beneficial. This means you will need to be very strategic which cards you play, which you keep in your reserve and which you pass on.

The locations are great and range from generic locations such as The ‘Thriving Trading Town’ and a ‘Busy Coaching Inn’ to more recognizable (to WFRP fans) places such as the ‘Four Seasons Coaching Hub’ and the ‘Ogham Monuments’. My favorite location art is from the ‘Chartered Free Town’ which borrows the artwork for the trading port of Kemberbad from the 4th Edition of WFRP. Built on the cliffs above the river Reik, the port consists of a complicated series of pulleys with which merchants must transport their goods up to the town. 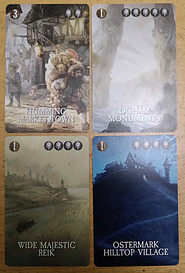 Laying a location brings in schillings but if you don’t place defenders there then it remains vulnerable to attack from other players. Each defender has a different defense value and some have extra effects such as ‘Counter’, which allows a defender to neutralize a certain type of attacker, or ‘Retreat’ which allows your defender to return to the hand rather than be discarded after a conflict. The strongest defense card is the ‘Garrison’ but you can only have one per location.

Attack cards have attack values ranging up to 9 points and can be combined for greater totals, but only with cards which have the matching ‘Ally’ key word. The ‘Colleges of Magic’ are the biggest faction, but other Ally groups include ‘Mercenaries’ and ‘Kislev’. A couple of attackers also have the ‘Assassinate’ key word which allows them to remove a specific defender card from a conflict.

In addition the player has access to a number of ‘Support’ cards which benefit them in a variety of ways. Some earn coin, some help defeat attackers and some shore up your defenses. These also have cool artwork on them and my favorite is the ‘Experimental Artillery’ which allows you discard a single defender card to defeat one enemy attack on one of your locations.

Each location has a number of skulls which corresponds to its victory points score. Points are awarded at the end of the 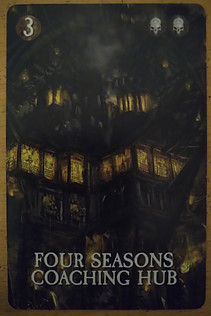 game for any locations you have in your play space which don’t have any attackers on, and also you gain the points of the locations in other players’ play spaces which you have attackers on. This means you are constantly weighing up the cost-benefit of reinforcing your defenses, attacking other players’ locations or attempting to remove an enemy attack from your locations.

The tension really heats up in the end game where the dynamic changes. Once the end game is triggered by drawing the ‘End of Game’ card, play speeds up as each player just takes one action without drawing ‘Reinforcement’ cards on their turn. Play continues frantically until one player can’t make a move and that point the scores are totaled up.

One thing I love about Elector Counts is how quickly and how often the tables turn during the game. Because each time you remove an attack from one of your locations, you gain the points and your opponent loses the points for that location. It is definitely a game which is not over till its over and it keeps all players on their toes till the very end!

As a Warhammer Fantasy Roleplay fan, I love Elector Counts for its gorgeous art-work and links to a world I know and love so well. The game, though, is a thrilling competitive romp whether you are a hard-core fan or are totally new to the lore of the Old World: There is no experience necessary, whether in role playing in general or in Warhammer specifically, in order to enjoy the game.

So old-school Warhammer grognard or not, I would definitely give Elector counts a go! And although it says for ages 14+ on the box, I’ve played it with my 8 year old and he got fine!

Let me know in the comments below if you’ve tried it and what you thought of it. Let us know what your favorite card games

are or just say hello if you are a WFRP fan!