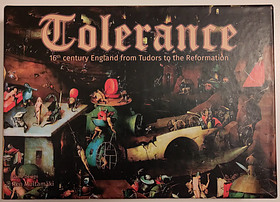 Welcome to my review of Tolerance from my friends at Dragon Dawn Productions. Tolerance is a historical themed trick-taking game set in 16th Century England.

The game is still in development and I have been lucky enough to playtest a prototype version of the game. The images of the components, therefore may not be representative of the final product.

I have previously reviewed a number of awesome games from Dragon Dawn Productions, check out my posts here:

Tolerance is a game with a rich historical theme. The game takes place over three rounds with each round defined by the sensibilities of the reigning monarch. 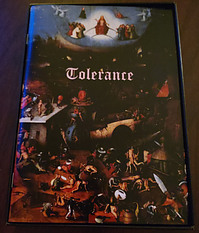 The first round occurs under the reign of Mary Tudor, the only surviving child of Henry VIII’s marriage to Catherine of Aragon, his first wife. Mary I was a staunch Catholic and sought to reverse the reformation which began under her father’s reign. This she went about through violent reprisals, burning nearly 300 religious dissenters in her short 5 year reign, hence the nickname, Bloody Mary.

The second round occurs under the reign of Elizabeth I, Mary’s younger half-sister, born of Henry’s second wife, Anne Boleyn. Although imprisoned by her sister under the pretense of supporting Protestant rebels, Elizabeth was much more moderate in her position whilst on the throne and maintained a stable government for 44 years.

The final act falls under the reign of James I, son of Mary, Queen of Scots and a great-great-grandson of Henry III. James was fiercely Protestant and, particularly after the famous Gunpowder Plot, sanctioned measures to control the Catholic population, although he was not as brutal as Mary had been against the Protestants. 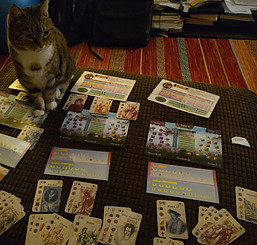 To start the game, each player chooses a character card to play. It is recommended, the first time one plays, to choose Bertrand the Balanced which is a character designed to get one used to the different elements of the game and the scoring system.

Once you are familiar with the rules you are encouraged to branch out and play one of the more nuanced characters, each of which have their own religious and political leanings and varying victory conditions. These characters will each require a slightly different tactic to be employed in order to garner the most victory points. More on these later.

As discussed above, there are three rounds, and each rounds consists of 12 tricks. There are 5 suits within the deck, each containing cards numbered 1-12. The suits are, in order of priority, Nobles, Clergy, Townsfolk, Peasants and the Wild suit.

The cards themselves are gorgeous to look at, each with period artwork and a variety of real personages from the time, such as Catherine de Medici or Pope Leo X, and more generic characters like the Inquisition or a Wandering Bard. The style of the cards really brings you into the theme of the game with the art really immersing you in the era!

The basic mechanic of the game is the ‘trick’ and this should feel familiar to anyone who’s played a trick-taking game before. One player leads the trick and sets the suit for that trick with all other players following suit if they can. If you have a card in the lead suit you must play it or play a wild card. The winner of the trick is the player with the highest card in the lead suit.

Now, this is where Tolerance gets interesting! Most cards have and ‘End of Trick’ effect which is enacted as soon as the trick is finished. End of Trick effects are acted upon the cards in the trick and include collecting taxes from other cards, collecting ‘Piety’, killing other cards or attempting to convert them from one religion to another.

This is a fun part of the game where the trick winner is able to score gold and piety depending on the cards played. 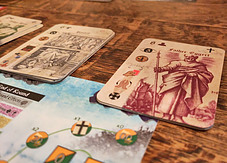 Sometimes these scores will be negative and depending on which character you’re playing you will be either happy or upset to see members of certain faiths killed!

The winner stores their cards on their player boards and separates them into Catholic, neutral and Protestant. There are also separate spaces for the living and the dead! Each of these piles will accrue piety and victory points at the end of the round according to the metrics of your character sheet. 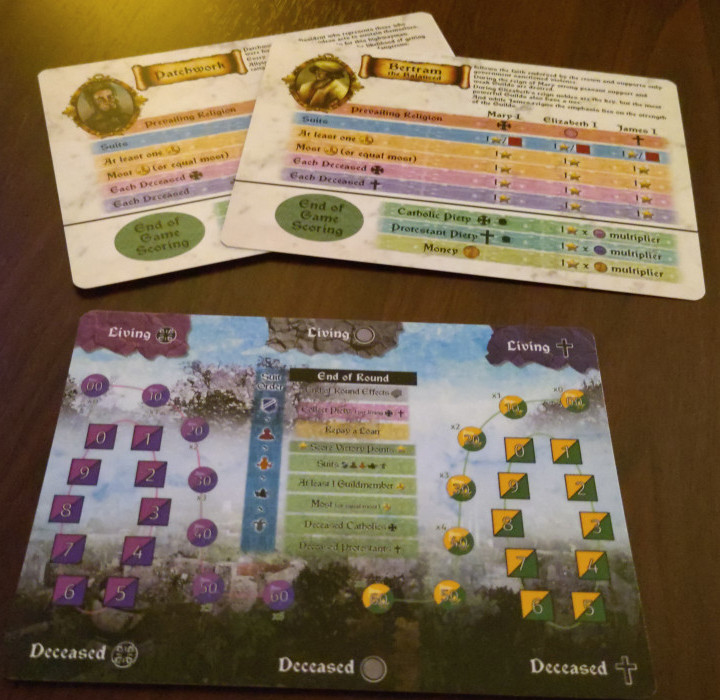 This aspect of Tolerance bring a whole new dimension to the game. It is fun with the balanced game-play, everyone playing Bertrand the Balanced, but with each player having separate aims depending on the sensibilities of their character, there is another level of tactics involved which makes the game even more interesting.

Each character embodies an aspect of the differing ideals and views prevalent at the time. You can play, for example, as Pierre, a hard-line Catholic who gains victory points for winning tricks containing Nobles and for killing Protestants. Or you can play as Ned, a devout Protestant who will gain VPs for deceased Catholics and lose them for dead Protestants. There are seven asymmetric characters to choose from, each with their own combination of victory conditions which makes for much more varied gameplay and outcomes. 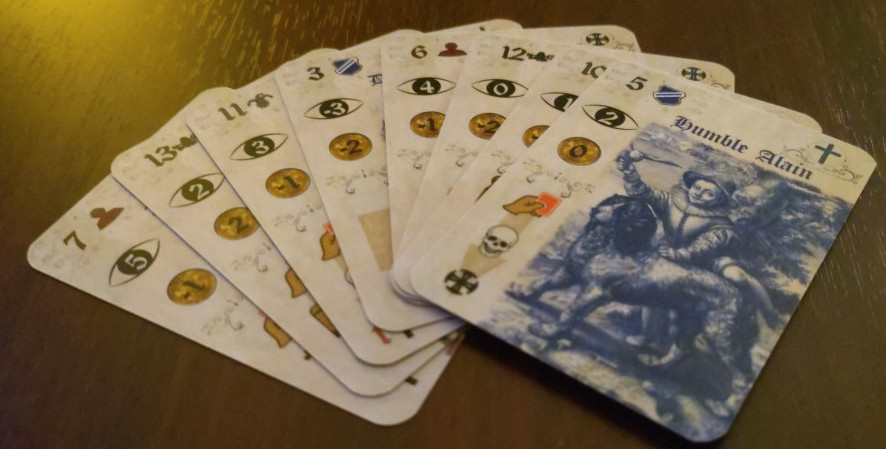 As this is still a game in development, some aspects of the game are likely to change between this playtesting and the actual release. The designers have been wondering whether to have individual boards on which each player can track their progress, or have a paper-based record system for recording their scores. Personally, I would like to see a shared central board with markers so all players can easily see the progress they are making in relation to each other.

I found it hard to manipulate the End of Trick effects. The scoring of each trick in terms of Piety and Gold seemed somewhat detached from the number of tricks won and the number of VPs gained. I would like to see the End of Trick effects taken off the cards and placed in a separate mechanic, so once the trick has been won, players would have the option of killing a certain type of card, or triggering the collection of Piety.

Perhaps each player could begin the game with a certain number of tokens (say four, for example) and they could use these tokens to trigger an End of Trick effect. For example, at the end of a trick, one could use a token to collect Catholic Piety, collect Protestant Piety, collect gold, kill a Catholic, kill a Protestant or convert a card to a certain religion.

Another option would be to have each character card have its own ability it can use a certain number of times per round. For example, Ned could kill Catholics, Patchwork, the Highwayman, could collect gold, even from a trick he didn’t win, or Pierre could kill a Protestant.

I think these suggestions, or a combination of them, could bring a tactical element to the use of End of Trick effects which, I feel, is a little overshadowed currently by the trick-winning mechanic. I think divorcing the effects from the cards played and putting that agency onto the players more could make for greater tactical play.

Now, of course, it may be that I just haven’t played the game enough times to really get my head around the intricacies of tactical play in Tolerance and that as I begin to master the different elements, especially in the asymmetric game, I will begin to use my End of Trick effects more strategically. Currently, however, I feel that the End of Trick effects could be leveraged much more if dealt with as a separate mechanic. Once I’ve seen the cards played, and who won the trick, I want to, at that stage, screw over my opponents by killing people they don’t want dead, or by stealing their Gold, or as the winner of the trick, choosing when to collect my piety.

Tolerance is in its final round of playtesting at the moment, so I realise that my suggestions are unlikely to be enacted for this iteration of the game. The designers have taken on the feedback though, so maybe future iterations may include some of these ideas.

Well, I have really enjoyed playtesting Tolerance! I love the deep historical connections, the characters and the artwork. I am really grateful to Dragon Dawn Productions for allowing me to be part of this process. It has been exciting to watch the development of a game in real time, with new ideas to try out and balance patches being tested.

I hope my suggestions are taken in a positive light as coming from a place of trying to help and not just as criticism and I am really looking forward to seeing the game progress towards its final incarnation.

I will be posting again as and when new developments take place – Tolerance should be ready within about 12 months, so watch this space!

In the meantime, check out the other fantastic games from Dragon Dawn Productions that I have reviewed:

Let me know in the comments below if you like the sound of Tolerance or what your favorite historical game is. If you have played any other Dragon Dawn games, tell us what you thought of them! 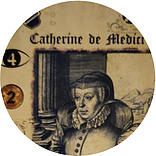 Stay posted for more great games and, as always, thanks for reading!