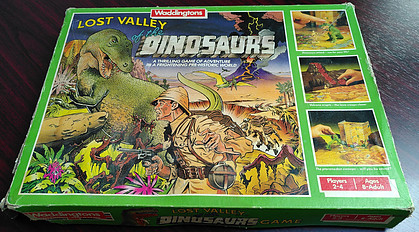 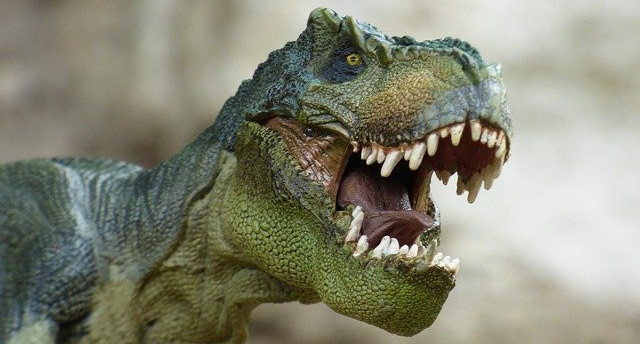 Welcome to the first post in my series of reviews on vintage classic board games! 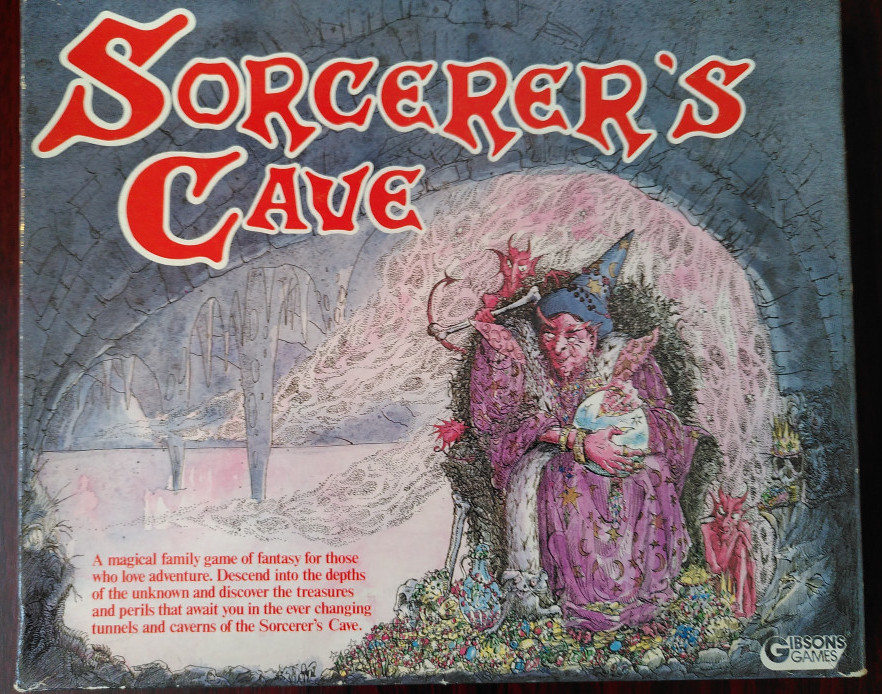 Cave which you can read about in my post Solo Fantasy Board Games – Old and New where I compare it to the modern epic Gloom of Kilforth. I will be adding to this series infrequently as and when I can get my hands on an old classic. The next one on my list is Mystic Wood which is from the same designer as Sorcer’s Cave.

Today’s post is all about Lost Valley of the Dinosaurs which is a game I played to death as a kid. It was released in 1985 and was one of my absolute favorites growing up. Devised by Julian and Tonie Courtland-Smith, it was influenced by Sir Arthur Conan Doyle’s 1912 book The Lost World.

I picked an old copy up from Firestorm Games, Cardiff, the other day at their bring-and-buy sale. You can read more about our road trip to Firestorm here. Ours is definitely second hand and is missing the pteranodon, the temple roof and most of the explorer meeples, but it was only a tenner and we have been able to make do with pieces we’ve pinched from elsewhere. If you are looking for spare parts, the best place is probably here on eBay.

Lost Valley of the Dinosaurs 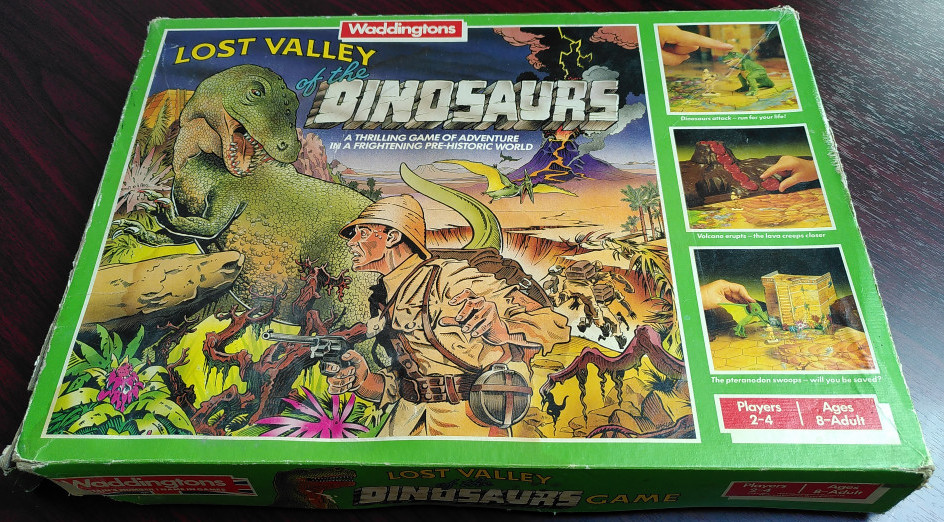 Straight out of the box, this is a beautifully produced game! The board looks fantastic and has large 3D mountains around the edge as well as a cardboard temple which looks awesome! Stylistically, it all looks great; the rules are printed on a single A2 page and is made to look like an ancient manuscript but the thing that stands out most for me is the amazing artwork on the back of the board. You almost never see this in modern games, but here you have a stylized version of the board art on the reverse side with a couple of paragraphs of text setting the scene and theme of the game.

I was a big fan of Indianna Jones as a kid and The Lost Valley of the Dinosaurs really captures that daring sense of adventure I loved about those movies. The game itself has a Victorian feel to it, the explorers wearing pith helmets and carrying revolvers and it effectively conjures up that era of global exploration – I like to think that Sir Doyle would have loved it!

In Lost Valley of the Dinosaurs, players take on the role of competing groups of explorers who have discovered an ancient temple full of gold. The objective of the game is to traverse the valley, reach the temple and get back safely with as much gold as possible. 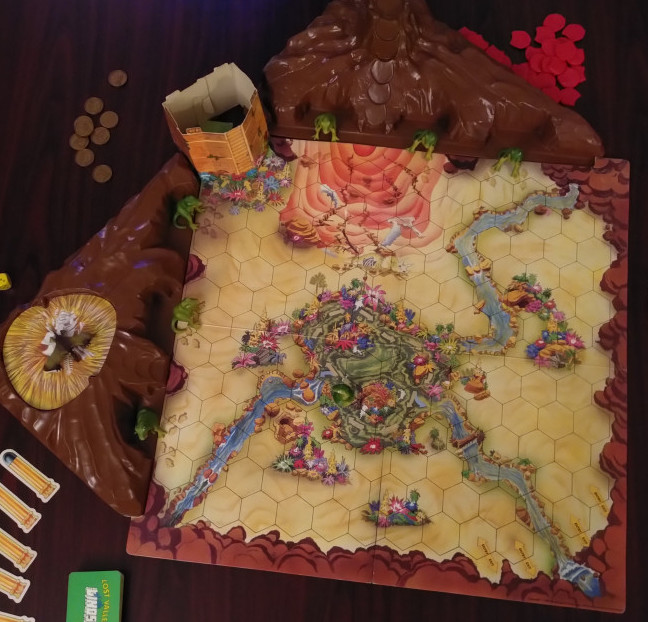 There are, however, several hazards which will impede your progress! The most obvious danger is the 6 dinosaurs who live nestled in their caves around the board’s edge. Various cards in the deck allow a player to move the dinosaurs a given number of spaces and if a dino lands on one of your characters then you are taken back to its lair to await your fate!

There is also a swamp monster who travels slowly around the swamp in the middle of the board consuming any characters unlucky enough to be stranded in its way. The final creature in the game is the pteranodon which you can use to aid your characters or hinder your opponents. And on top of all of this, there is the ever present threat of the encroaching lava which can block your path or trap your characters entirely cutting them off from the rest of the valley.

There is a lot going on in this otherwise simple game and the tables can turn very rapidly. The luck of the dice and the random event cards which are drawn at the start of every player’s turn make for a fast-paced and action filled experience!

Each player starts with a team of 4 explorers and even though the minis have guns, firearms are actually a very scarce resource requiring a special card to use. The game mechanics are super simple, just roll-and-move but it is the deck of cards which spice things up!

At the start of your turn you draw a card, most of which must be acted upon straight away if possible. Nearly half the cards allow you to move dinosaurs which you can use to capture opposing players and take them back to a dinosaur’s lair. This is not a certain death sentence for that character, however, as the dinosaurs only eat explorers when the ‘Dinosaurs Attack’ card is drawn. But likewise, captured adventures must wait until the ‘Dinosaurs Fight’ card is drawn, distracting the beasts long enough for the frightened team member to escape.

Other cards include events such as one of your expedition getting lost in the swamp, disturbing the swamp monster or your party becoming short on water. With the later, if you cannot reach fresh water with an explorer by the end of the go then one of your members dies! 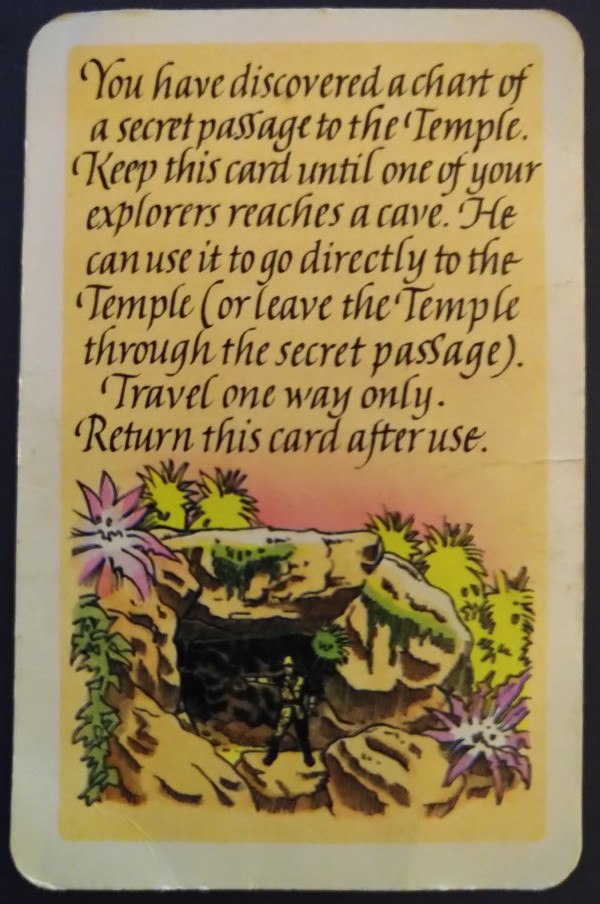 The volcano is also controlled by event cards and with each volcano card drawn, the lava rolls ever further down the mountainside until it begins to spread out across the floor of the valley, blocking off routes to the temple. The lava starts off slowly, just one token per card drawn as it comes down the volcano, but as it hits the ground, it speeds up, allowing the player to cover three hexes each time!

Some of the cards are very helpful, if rare, and those are the ‘Secret Passage’ card and the ‘You have found a gun’ card: The secret passage card allows you to use one of the caves as a shortcut, either to, or from, the temple, and the gun card allows you to visit an ammo dump to pick up some bullets which can be used to scare of dinosaurs.

There is also an ‘Escape from Swamp’ card which does what it says on the tin. This card is super helpful as any character in the swamp can only move one hex per go which drastically slows down your progress. 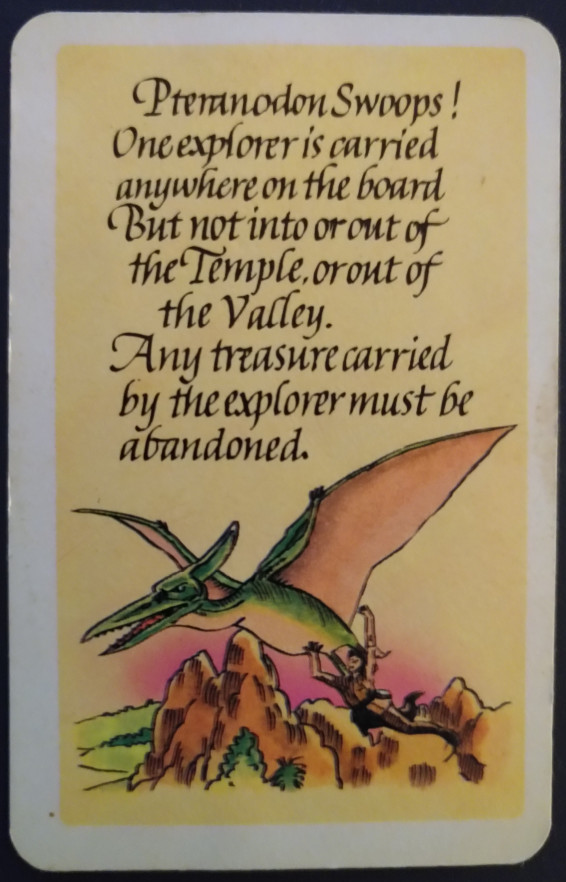 “How does one end up in the swam?” I hear you ask. Well, this is where the pteranodon comes in. By far the coolest element of the game is the pteranodon which is a large bird controlled by the player who draws a certain card, ‘pteranodon Swoops’ allows the active player to use the flying dino to pick up an explorer (and the original game comes with a model with moving parts so you can actually pick them up!) and move them to anywhere on the board!

This mechanic is really popular with the kids and the main reason the game is so exciting. You can use the pteranodon to rescue one of your explorers from the swamp and fly them right up to the temple door or, indeed, you can pick up a member of an opposing team and dump them in the swamp, right in front of the swamp monster! Either option is totally satisfying and allows you to turn the tables on a game, even when things look hopeless! 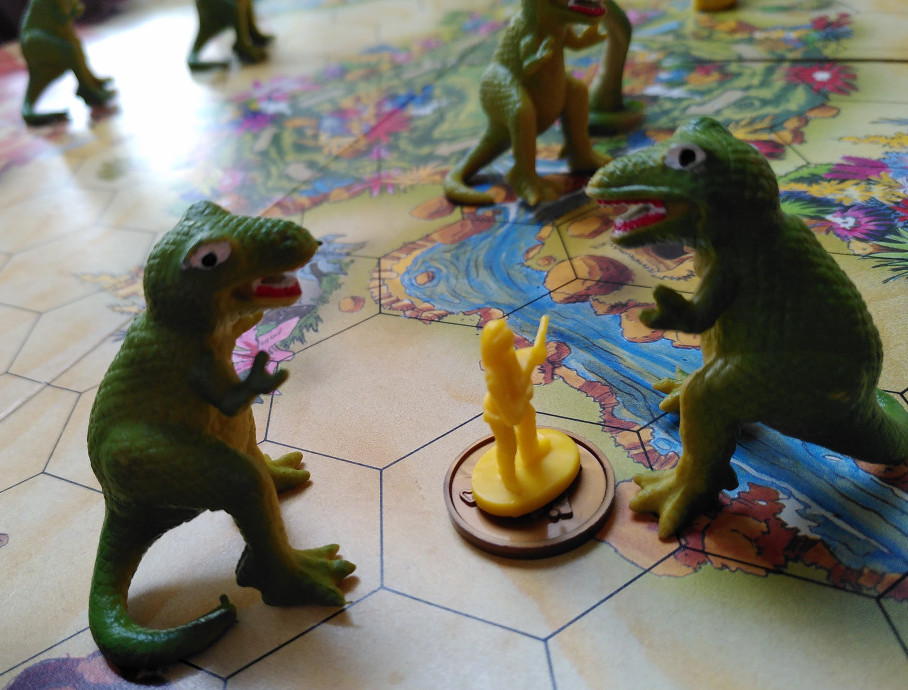 So there you have it! Lost Valley of the Dinosaurs is just as glorious now as it ever was nearly 40 years ago – massive kudos to the Courtland-Smiths for coming up with such an iconic and enduring game! It is even adaptable to a few home-brew rules if you see fit. We decided to make the lava flow rate two tokens each time a card was drawn so it reached the valley faster and we played around with the rules for guns to introduce a little more PvP action!

I’m so glad to have this game back on the shelf after all these years, even if it is a bit of a battered old copy! My kids love it as much as I did back in the 90s and I’m sure this will become one of our regulars.

And as always, thanks for reading! Let me know in the comments if you remember this game and what you thought of it, or let us know about your recommendations for other classic vintage board games you love! 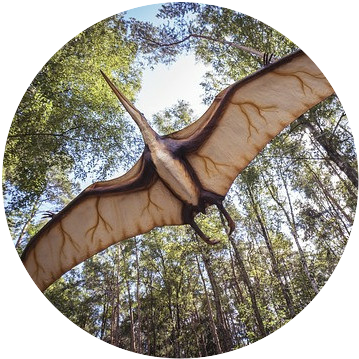 2 thoughts on “Vintage Classic Board Games #1: Lost Valley of the Dinosaurs”