Welcome to my review of Voyages board game!

I was lucky enough to see a post on Twitter from @postmark_games asking for reviewers to take a look at their new print-at home board game, Voyages, and I jumped at the chance.

The Voyages board game (co-desigerners: Matthew Dunstan @wisegoldfish and Rory Muldoon @wookiebait) is a simple one-sheet-per player game which you can play solo or with as many people as you like. With multiple people it becomes a bingo-on steroids, piratical romp through the high seas with players competing to gain the most gold by completing various objectives.

Although it is a game which has a simple concept and game mechanic at its heart, it has levels of strategy which only become apparent once you have played it a couple of times. It is part logic puzzle, part board game and each turn you have several strategic options, from which you must choose quickly, in order to maximize your gains.

One unique and interesting mechanic is that all players share the same dice roll. One player rolls 3d6 and every player must use the same roll, but there are a few different ways of utilizing the results. You must choose one die to set your course (direction), one die to determine your distance and one die to complete duties – and each player makes their decisions independently. On top of that, you can ‘exhaust’ your sailors in order to adjust the dice results. This means the number of options available to you are greatly increased. But exhausting sailors is not without its cost, as it means you may miss out on upgrading a sailor to ‘heroic’ status and you may not have enough to defeat the ‘Dread’!

Legendary stars are worth 3 gold each at the end of the game and are earned in a number of ways. In addition to recruiting your 12th sailor, you can earn legendary stars by collecting three of one type of cargo (fruit, spice, hide or gems), by completing certain duties, by landing on them on the game board and by defeating the Dread, which also gives you a whopping 14 gold! The first player to three legendary stars triggers the last round after which all the gold is totaled up and a winner determined.

Other ways to earn gold include visiting islands, selling cargo at ‘settlements’, exploring ‘uncharted regions’ and upgrading your sailors to ‘Heroic’ level.

I have played this game solo and with more players and whilst still a fun challenge on your own, the social element makes 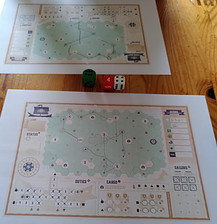 for a better game the more players you have. Playing with my kids has been fun too, they are 8 and 10 and they really enjoyed it. The art work is lovely and evocative and we had a good time world-building around the game for fun after we’d finished. My son (8) immediately began to dream up new house rules we could implement. He was happy too as he not only beat me but was able to defeat the Dread on his first go as well!

And all of that is only Map 1. Map 2 has its own unique set of rules and mechanisms which brings a whole new fresh dimension to game play. Map 2 has ‘marauders’ to fight which utilizes your sailors in a novel manner, a different mechanic for duties which allow you to gain brand new abilities, ‘forts’ instead of settlements which allow you to double your points for defeating marauders and ‘reefs’ which are impassable without having completed certain duties. 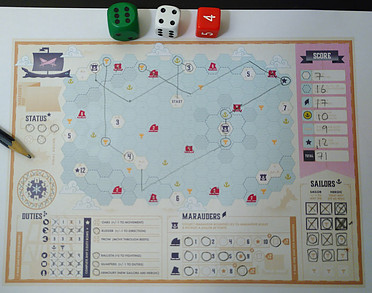 I was very pleasantly surprised at how different Map 2 was, I was not expecting so many rule changes between the first and second maps. I was expecting maybe one new mechanic and for everything else to be pretty much the same, just on a different layout of islands, but instead we got an entirely new aspect of the game with the ability to fight marauders which takes the place of cargo. The Map 2 duties scheme is awesome, allowing for some really cool upgrades. Bonuses for completing duties include being able to adjust the dice without using sailors, gaining a ‘prow’ which enables you to sail through reefs, a buff to your combat power and the ‘armoury’ which makes all new sailors heroic.

From what I can tell, it looks like the designers are planning new releases periodically and going by what I have seen so far, I am really excited to see what they come up with next. Definitely looking forward to a Map 3!

This game has so many possibilities for development. Clearly PostMark Games have a commitment to print-at-home games 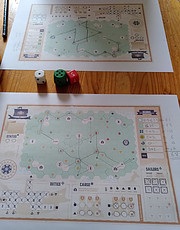 which is fantastic as they are so accessible with simple rules and affordable. But this game would work well as a larger physical board game with a few adaptations to allow multiple players to play on the same board, with physical tokens for the boats and cargo etc, or even as a tile-based game with physical hex tiles making up the game area. It would work really well as an online multiplayer as well, or even as a mobile app.

One of the rules adaptations my son came up with was making the sea a torus (so you come off left, for example, and reappear right, and likewise for up and down and visa versa) which would change the dynamic quite a bit as getting stuck on the edge makes for a great tactical pay-off. The way the maps are designed, there are higher rewards at the edge, but going near the edge severely limits your options for movement going forward.

I’d also love to experiment with playing on the same board as another player too and incorporating a bit of PvP action, so if you run into someone you could steal their cargo if you had more sailors or maybe trade with them.

All in all, this is a fab little roll-and-write game which can be lots of fun solo or with friends. I’d love to play online with lots of players simultaneously, and actually, as a teacher, I think it would work as a fun, whole class game at the end of term.

Really accessible for kids and strategic enough for adults with a nice balance of luck and skill – I think I am becoming a bit of an addict! Can’t wait for Map 3 to be released!

And you can purchase the game here: https://www.postmarkgames.com/

If you are interested in my recent series of posts on the Top 20 Family Board Games, click here!

As always, leave your comments below – let us know if you’ve played it and how you liked it, or if you have any suggestions for furture development. My high score is 89 – can you beat that?!

Thanks for reading and happy gaming!