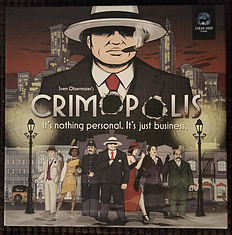 Welcome to my review of Crimopolis, the fun-filled gangster game from Cheep Sheep Games.

I have previously reviewed Castleshire, another fantastic game from the same company – read about it here!

Crimopolis is a fantastic strategy game in which you play as gangsters in an ever-growing town, earning prestige by completing jobs and dispatching your rivals. It is a medium-weight game with lots of replayability! 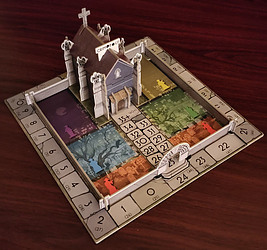 The first thing I noticed, straight out of the box, was the overall quality of the game. Crimopolis is definitely one of the best produced games I’ve reviewed! In fact, if you are a publisher, then I would seriously recommend taking a good look at this game as it is a lesson in product design!

Firstly, the art-work is spot-on and matches the theme of the game perfectly. It is not too stylized or too silly and immediately brings you into the world with just the right tone.

The next thing I noticed was the meeples. Gorgeous little gangster meeples with not just a different colour, but a different and distinctive shape for each player.

The cards, tiles and other pieces are also of a high quality, but the thing that blew me away was the 3D board! The score board could easily have been very simple with just a number track, but Sven went full hog on this one with a beautifully crafted cardboard church and graveyard!

The card is thick and robust and the assembly instructions are very clear. And the best bit is that once you’ve built it, it looks 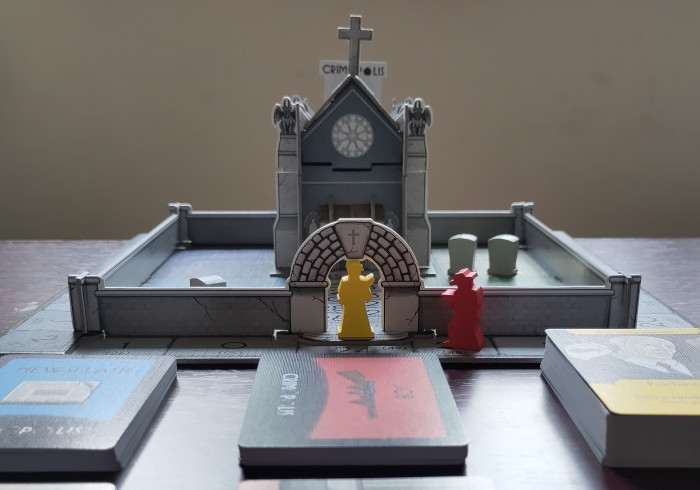 But the feat of engineering does not even stop there, for the level of thought that has gone into the insert tray means that each component has its home and the church, with its easily removed roof, slots back into the box with no disassembly. This may not sound like much, but not only is it super satisfying from a geeky perspective, it also makes packing away the game very simple.

Cheap Street could easily have made more economical design decisions here, but I am really glad that they didn’t. It’s so great playing a game with such high-quality components!

The rule book is also laid out very well with lots of visual aids, examples and important points highlighted. Sven has even made it clear how much space you will need for the board which I think is a nice touch.

Game play takes place on a board made of tiles which expand as your gangsters explore the city. Players begin with just a Headquarters each and a few city tiles and every time your meeple moves to the edge of the city you take a new tile and lay it down. This means that each time you play, the layout will be different.

Each player always has two Job cards which give a location, the number of gangsters needed to complete the job, the time required to do the job and the number of Prestige points earned on completion. These are the main drivers of the game as you will need to recruit enough gangsters and travel to the right locations in order to earn the prestige.

Players get 7 ‘hours’ per turn and a variety of actions to choose from, each of which takes up time, so you will need to plan your turns carefully in order to make the best use of the clock. Any hours not used in your turn are added to the next players go, so make sure you use all your time!

The actions available are:

The combination of limited time and the array of actions available means that every turn you will be making hard decisions, weighing up the options to achieve your aims, or to thwart you opponents efforts. Every decision will be a trade off. Do you head for your job or Ambush the nearby rival’s gangsters? Do you pay to discard a job or go exploring and hope you can find the right location?

Timekeeping is managed via use of a stylish clock which players oversee for each other. Not only is this a lovely mechanic which keeps one engaged when it’s not your turn, but it is another example of Obermaier’s attention to detail with the design. The clock is made of the same quality cardboard as the other components and fits neatly into the box with it’s own slot for the hour hand so it sits flush. 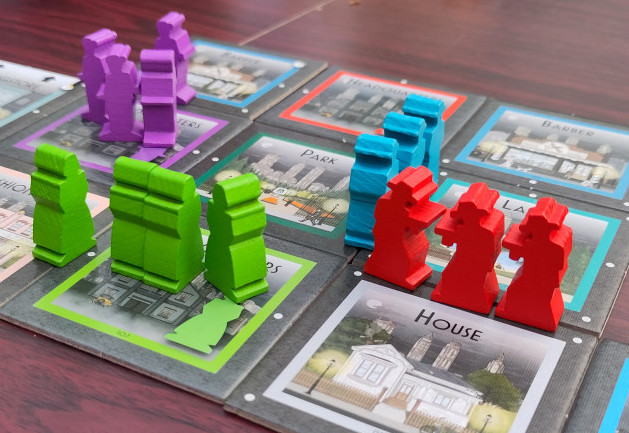 As is fitting for a game all about gangsters, there is a neat mechanic for dispatching your opponents! If you have enough hours for the movement to reach a road section with another gang’s meeples on, then you can opt to Ambush them.

When you conduct an ambush you remove your own meeples and those of your opponents one-for-one from the board, but you gain Tombstones for each gangster you ‘cut down’. You collect your tombstones in your section of the graveyard and earn a prestige point at the end of the game for every two tombstones you were able to acquire. The same rules apply when you conduct a hostile takeover of a city block but the cost of attacking another player is high, as you also lose gangsters, so I found it best to pick on loan gangsters, rather than taking on a larger posse! 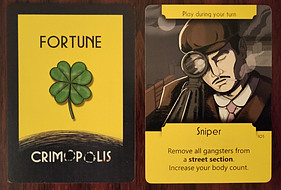 To buy a fortune card takes 2 hours of your turn, but they can be a good investment as many of them hold Prestige points which, if held onto until the end of the game, you can cash in. They also give you powerful one-time actions which you can use at any time, for free, during your turn.

Some cards allow you to move another gang’s meeples around the board or force another player to lose time on their next turn. Others give you more hours to play with or can be used to protect yourself from unwanted fortune cards played against yourself.

The game end is triggered when the first player gets to 21 Prestige, after which point, every other player gets one more turn before the totals are scored. You gain points for city blocks occupied, your ‘Body Count’ – number of tombstones – and any Fortune cards in your hand which have the Prestige icon.

The game really heats up towards the end! As you can see clearly how many prestige your opponents have, the last few turns are all about maneuvering your gangsters into advantageous positions. Expect lots of last minute ambushes, hostile takeovers and Fortune cards flying around as everyone tries to outwit their opponents before crunch time!

Crimopolis includes several variations on game play that allow you to adapt the game to suit your play style. I really like this aspect of the rule set as it brings new element to the game.

The Lucky Speed Game is a quick version of the game in which you only play up to 13 Prestige points. There are a number of city tiles with a clock icon in the corner which you separate, shuffle and place on top of the draw pile. This ensures that one of each location comes out quickly and facilitates a fast game heavily influenced by luck.

The Deeper Stragety Game, on the other hand sees you playing until 42 Prestige. This variation does what it says on the tin, as the longer the game, the less luck is a factor and the more that your planning and strategy have an impact on the outcome.

The rules also allow for a Timed Game of any length, so rather than playing to a certain level of prestige, you set the length 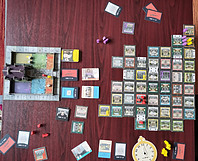 There are a couple of optional rules for scoring and a Team Mode as well. This last option is great if you have more than 5 people who want to play, as you can double up the numbers of players on each set of meeples.

There are several expansions available for Crimopolis which, although I have not been fortunate enough to play them, sound awesome! Each expansion, or ‘Evolution’ brings a new mechanic or angle to gameplay which I am champing at the bit to have a go at! 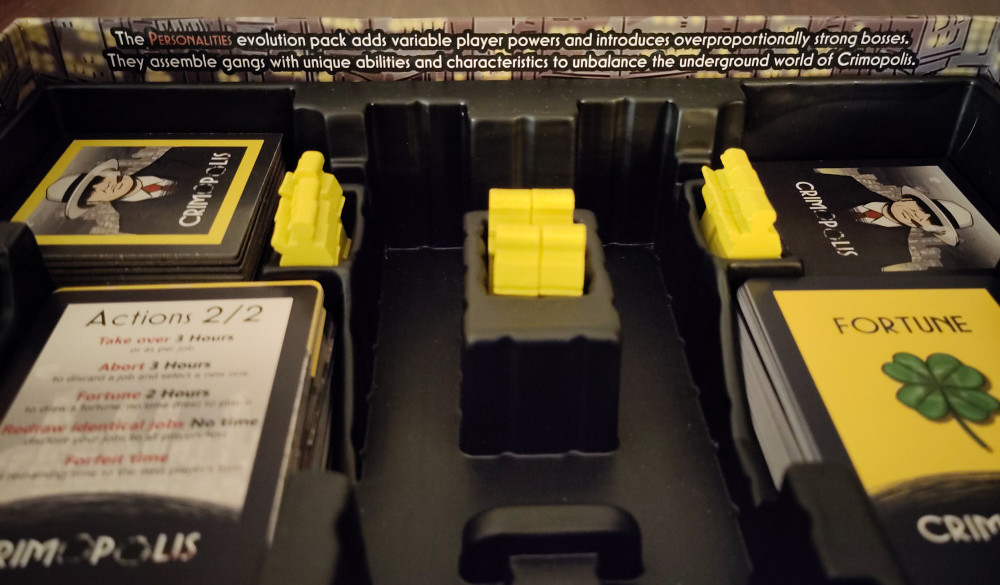 In the Sugar expansion a resource element is added which sees your gangsters collecting alcohol, weapons and cars to trade for prestige. And, in the Enemies and Mergers expansion, you can play with up to 7 players and new character options are introduced such as the Citizen, the Detective or the Mayor.

Each of these sound great in their own right and I wonder if the expansion rules can be combined to make an epic Crimopolis game! If I find out I will post about here so stay tuned! 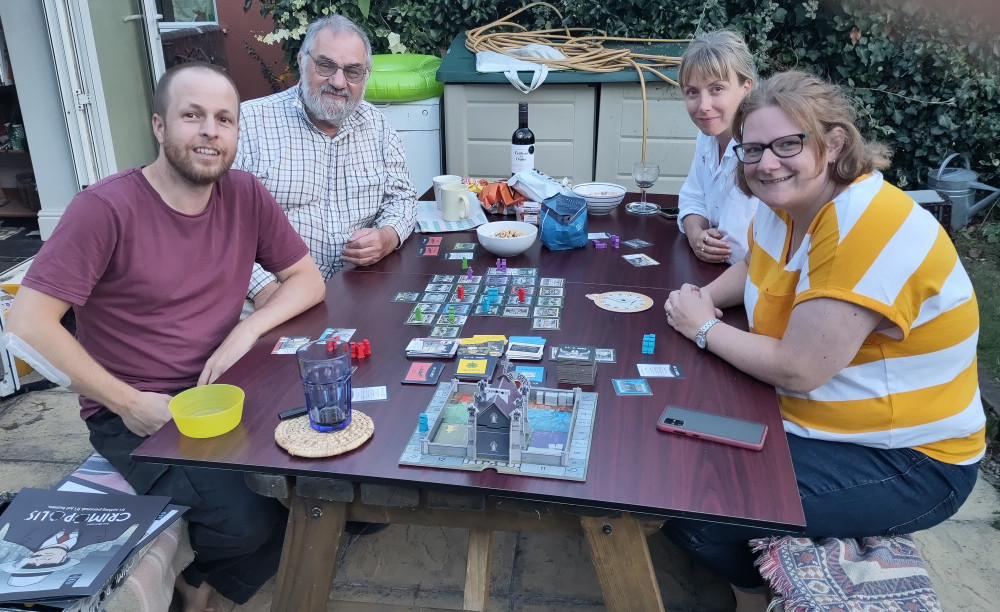 I had so much fun playing Crimopolis, my kids loved it and so did my friends! The rules are quick to pick up and I love the options for tailoring the game to your group’s sensibilities.

Its great that you can opt for a quick game if you are short on time and want a bit of a filler, but I think Crimopolis really comes into its own with the longer game where strategy becomes more of a factor in the outcome. It’s an open-world worker-placement game with a really neat set of mechanics which make me want to return to it again and again!

I absolutely adore the production of Crimopolis! The design and the engineering which went into this game are phenomenal, so massive kudos to Sven Obermaier and Cheap Street Games for producing a beautiful game which is fun to play, looks great on the table and is ever so slightly addictive!

And be sure to check out my review of Castleshire, also by Cheap Street Games here!

Let us know in the comments if you’ve played Crimopolis and what you thought of it, especially if you’ve played any of the evolutions. Or tell us what your favorite gangster themed game is! 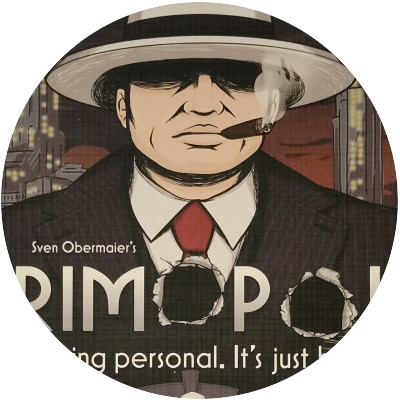