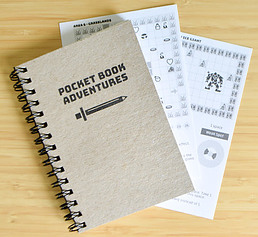 Welcome to my review of the latest iteration of Pocket Book Adventures!

If you haven’t been following the journey of this awesome little game check out my first impressions and the second round of playtesting!

Pocket Book Adventures is a fun, travel-sized solo dungeon-crawler. Designed to fit in your pocket so you can take it on the go and play anywhere, all you need is a pencil! Take yourself on an adventure through different terrains, battling critters and big bosses, collecting gold and cool items and become the champion you were always destined to be!

With a minimalist design theme, Pocket Book Adventures conjures up the feel of old-school PC games such as Rogue which I played to death in late 80s and early 90s. It uses grey-scale printing and cute iconography to represent monsters, terrain and items, but what makes this game unique is the ingenious “point-and-write” mechanism which one uses to resolve combat. 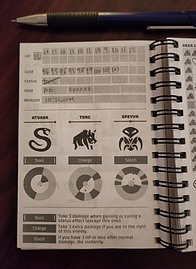 When fighting monsters, you place your pencil on the attack bar above the creature, close your eyes, lift the pencil and stab the page, hoping to get a bulls eye on the enemy target. If you succeed, you kill the creature and take no damage, but if you miss the bulls eye, you take damage depending on how close you were and if you land on the wrong part of the target, you will trigger an enemy ability as well.

This is such a fun mechanism which strikes the balance between skill and chance really nicely. Your dexterity and hand-eye coordination are definitely called into play here but no matter how skilled, you always run the risk of missing that Bullseye!

In previous versions, David had movement determined via a similar mechanism to the combat, but after feedback from play testers he has removed this and replaced it with various puzzle elements. The game takes you through 7 unique regions, each with its own rules for movement. 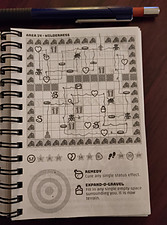 I actually prefer the new version, although I liked the target-based movement. I love the different rules for movement in each region, which give each one a unique feel and requires different strategies to be employed. In The Grasslands, for example, you have ‘Free Movement’ allowing you to travel up to 4 squares in a straight line, only turning if you hit terrain. In The Wilderness, you have to move 4 squares unless you hit an enemy or terrain and in The Ice Fields you keep moving in one direction until you hit something.

These different movement rules bring a real puzzle element to some levels which causes one to pause and really think about the optimal strategy. My favorite one is in The Dungeon where you basically get free movement, but if you pass over a space which you have previously been in, the ground crumbles away and you drop into the level below.

As you progress through the levels you will be tracking your HP, your gold and any items you pick up along the way. Cool items include Remedy which can cure you of any status effect you have picked up from monster abilities, Pixie Dust which heals two HP, and, my personal favorite, Expand-O-Gravel which allows you to fill and space surrounding you with a block of terrain.

This really comes into its element in The Ice Fields where you can only stop moving when you hit terrain, and with some items impossible to pick up otherwise, Expand-O-Gravel becomes essential if you want to reach them. But you’ll need to work out where best to place it first!

Each monster has, not only its own unique and gorgeous little icon, but has its own target with its own particular combination of dark and light shading demarking the areas which, if hit, will trigger its ability. David has gradated the difficulty well, so one starts off fighting little creatures such as Pixies who’s ability, Misfire, actually allows you to recover two HP. but the challenge ramps up until you are fighting Watchers who’s ability is to give you the status effect Doom which kills you instantly when you exit an area. 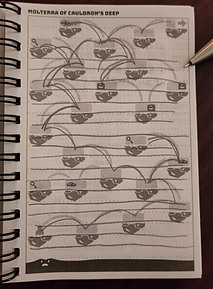 At the end of each region, you encounter a boss monster, these are special monsters which get a whole page to themselves and for which there are individual rules. These are definitely a highlight of the game as each boss requires a new strategy in order to defeat it.

My favorite boss is Molterra of Cauldron’s Deep which is an oozing blackness which creeps up the page each turn threatening to devour you as you attempt to escape by jumping from ledge to ledge as in an old platform game. There are cleverly placed treasure chests intended to lure you in, but will you be able to grab them before you get consumed by the ever-rising Molterra?!!

Another great element of the game is the Inn. Every now and again you get a break from bashing monsters and rest up at the Inn. Here you have the chance to increase your Max HP, heal up, purchase some items and, if you have enough coin, to buy a cool weapon. Each weapon has a special feature such as reducing damage if you hit a certain area on the enemy target, or the ability to cure a status effect.

There are two weapons I am particularly fond of. The first is the Centering Rod which, if you get the bulls eye, stops all other monsters of the same type using their ability. The second is the All Light Sword which means you take no damage on lighter portions of enemy targets. 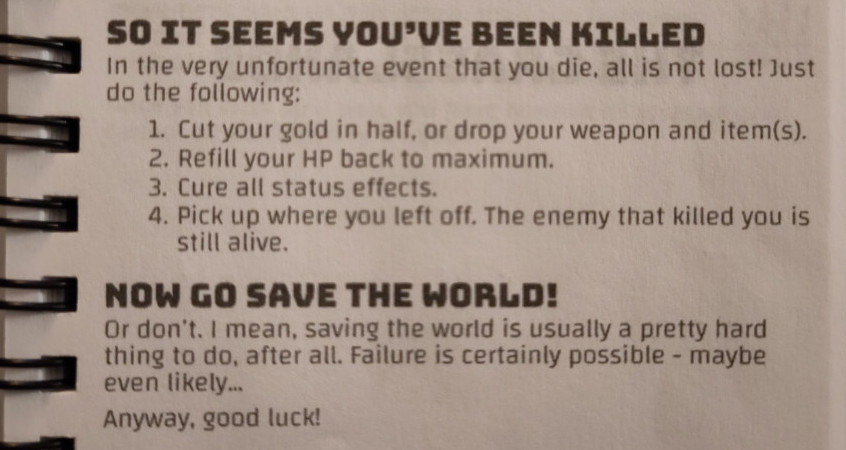 Being horribly murdered by some foul beast is all par for the course among adventurers, and it is no different in Pocket Book Adventures. But don’t worry if you find yourself reduced to zero HP, for you are allowed to respawn and continue, but you must lose half your gold or lose all your items and weapons.

So over the last couple of weeks I have been playing through the whole book, all 7 regions, 50 adventures and 7 bosses! I’ve had a total blast. One nice touch is that as you go you track your progress. You get points for how many baddies you killed, how little HP you lost and how few steps you took. Add these points up at the end to award yourself your adventuring title!

With 73 points worth of baddies, 131 points in damage and 93 points in distance, I was crowned The Skittish Champion of Mankind! As you can see I was a bit cowardly and did not go all out on making sure I killed all the monsters in each area.

I am now looking forward to the final product being released so I can have another go and improve my score. I want to get to at least Courageous!

So there you have it! Pocket Book Adventures, the hand-held dungeon-crawler which punches above its weight in fun!

If you haven’t done so already, go check out the Kickstarter and get your pledge in! I know you won’t be disappointed – hours of old-school fun!

And if you are interested in the development of the game check out my previous posts on early versions of the game:

Let me know in the comments below if you pledge on the Pocket Book Adventures Kickstarter. Or tell us your favorite pencil and paper game! 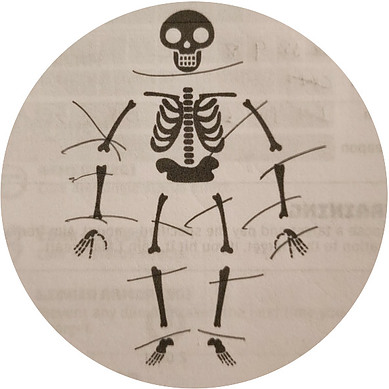