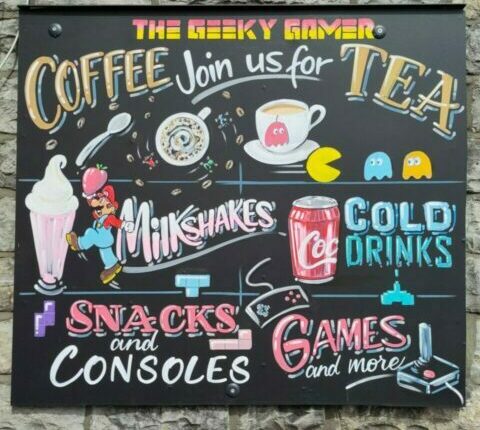 Welcome to my review of The Geeky Gamer board games cafe in Street, Somerset where I entered a Bloodbowl tournament over the summer.

Read on to find out how friendly and fantastic this little games cafe is and to find out more about the awesome tabletop game Bloodbowl!

Check out my other board games cafe posts:

Check out my Play-By-Post RPGs over on StartPlaying.Games! 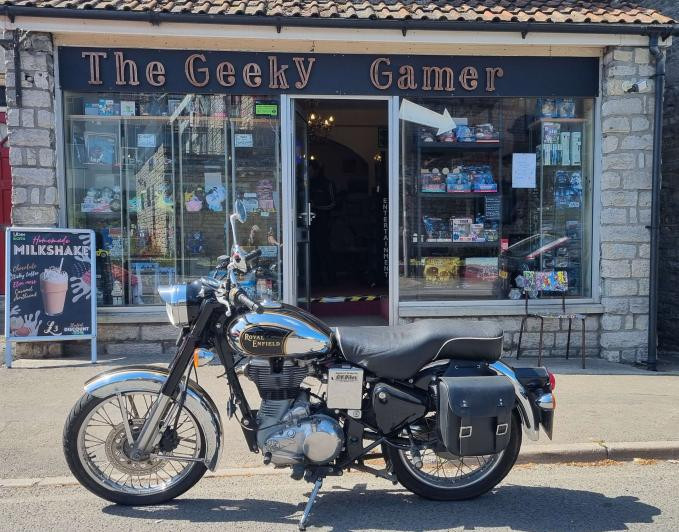 The Geeky Gamer is a fab little games cafe in the quaint town of Street in Somerset, near Glastonbury. It is run by Mark Wheeler who is super friendly and has built up a growing and active community of local gamers. Watch The Geeky Gamer’s cool promo video here: 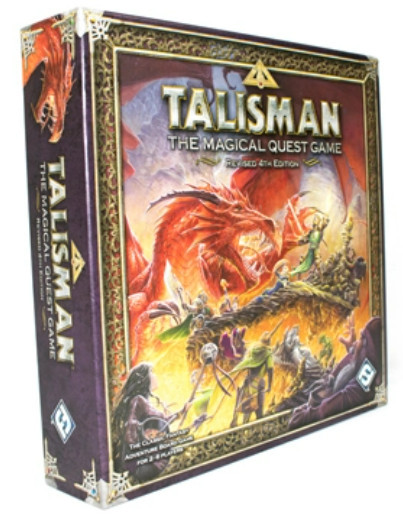 Although the Geeky Gamer places an emphasis on wargames, there are games for all tastes being played. The main board games on offer are Talisman, Heroquest and Marvel Crisis Protocol.

Talisman is a game that has been around for as long as I have – literally! – it was first released in the same year I was born, 1983 and is now on its 4th edition. It is an epic fantasy game of magic and monsters which a dizzying array of characters to choose from.

Heroquest is a golden oldie from my childhood, it was my gateway drug to gaming and RPGs and has recently been re-released. Weekly Sunday games of Heroquest are running at the Geeky Gamer every Sunday.

thrown in-game. There are also regular games of Marvel Crisis Protocol being played every Saturday.

All the major trading card games are also played regularly, including Pokemon, Digimon, Magic The Gathering and Yu-Gi-Oh. You can pop in to buy new packs or organize a game and rent a table. 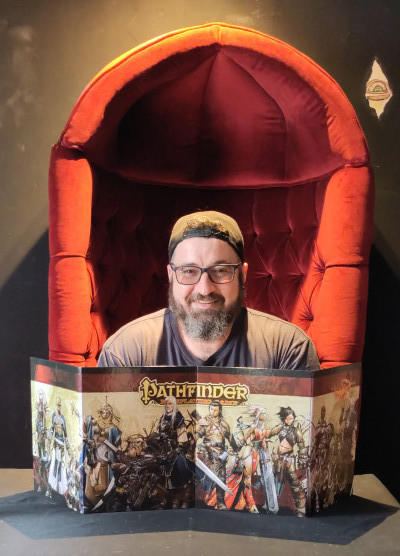 There is an active group of D&D players at the Geeky Gamer who meet regularly for one-shots and longer campaigns. There is currently a Waterdeep: Dragon Heist campaign running as well as an upcoming Halloween one-shot, with more games being organized all the time!

Wargaming is probably the most popular activity at The Geeky Gamer, with loads on offer for those who love miniature battles! From Warhammer 40K through Necromunder to Kill Team and everything in between. There are also groups who play Warhammer Quest and Warcry amongst other fantastic games from the world of Warhammer, so whatever you’re into, you’re bound to find some like-minded individuals to play with! 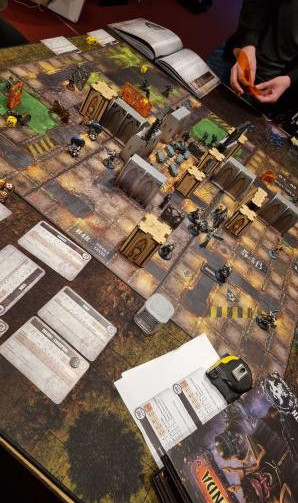 Tables cost £5 per person for 3 hours which is very reasonable. There are two tables in the main room, one out back and then there is The Dungeon which is a private room at the back which is perfect for D&D with a special throne for Dungeon Master! You can even rent the whole shop for just £50 a day and organize your own private party or event.

For such a small venue, there is a wide variety of drinks and snacks on offer. Coffees, teas, milkshakes, smoothies and canned drinks are available, as well as bacon rolls and burgers and plenty of snacks to keep you well-fed through your gaming sessions! 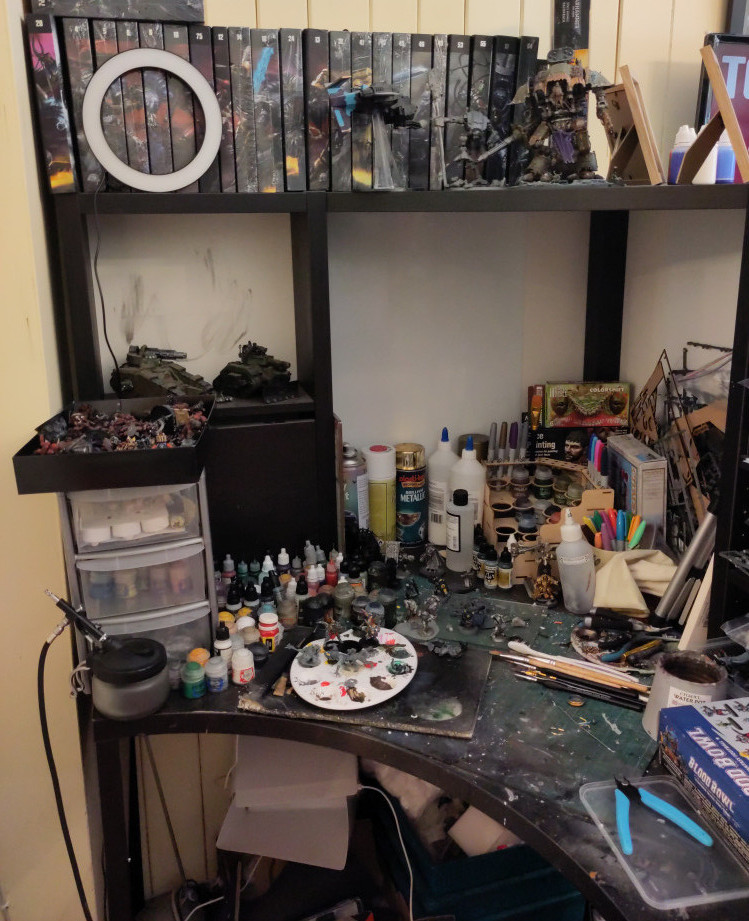 This is a really nice touch! For £5 you can rent a table for painting and The Geeky Gamer will supply the brushes, paints, lamps, cutting mats and everything else that you could require in order to paint your minis. Mark and his friendly clientele will be around to give advice and they even offer a figure painting service so you can get that professional look without all the hassle!

Mark also has a telly set up with a variety of video games to play for free. This is a really cool aspect of the cafe and shows Mark’s commitment to community. He allows the school kids to come in and play video games after school which is not only a really nice thing to do, but a crafty way to introduce them into the world of war gaming! 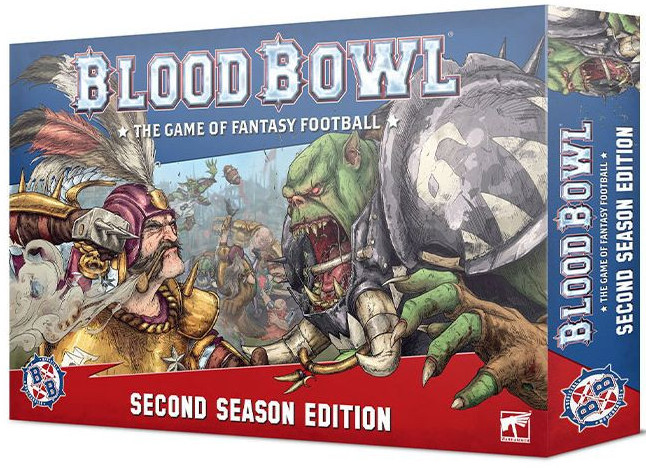 Blood Bowl is one of my favorite games! It is tactical, violent, funny and I really suck at it, but that doesn’t stop me loving it! I had the opportunity to join in on the Geeky Gamer Bloodbowl 7s tournament during the summer and I had a blast!

If you don’t know, Blood Bowl is the game of fantasy football in which you manage a team of violent hooligans in the Warhammer equivalent of American Football. Usually played with 11-a-side, Blood Bowl 7s is a relatively new version in which you play with, you guessed it, seven on each side.

All the usual Warhammer races are represented, so you can play humans, orcs, skaven, undead, werewolves and a whole host of cool teams. Each team has their unique players with special skills and rules, but the basic aim of the game is the same, whatever race you play – get the ball to the other end of the pitch and put as many of the opposing team out of action as possible!

Over the course of a day we played 4 games and I lost every single one! Some of them were close, though, and in one game 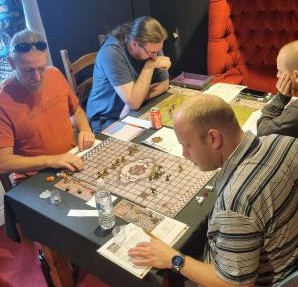 in particular, the dice were against me!

I played a human team with an Ogre, two blitzers and a catcher and three linemen which are the basic players. I can’t blame the team, though, it was my slow thinking, lack of tactical experience and poor dice throws which lost me the games!

Blood Bowl is different to many other skirmish-type games because it is so tactical. A good knowledge of the rules is essential if you want to do well. It is like chess on steroids, with orcs and a body count! Games are timed, sometimes each turn is timed: 2 minutes per turn is usual. We didn’t play timed turns, but had a total time for the game which had to be stuck to, so in more than one of my games we had to finish before all 12 turns were played – mainly due to the amount of thinking I was doing!

If you are used to regular Blood Bowl, then there are a couple of key differences when playing 7s, apart from the fact that you only have 7 players. The first is the roster. Rather than the 1,000,000 gold coins you have to spend, you only get 600,000, which makes sense, as you need fewer players. You are also limited to 4 special players with the rest having to be linemen. 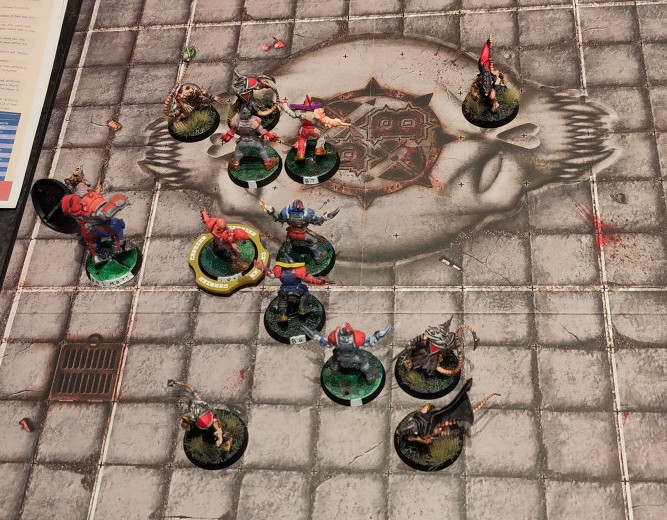 The other major difference is the line of scrimmage. In a regular game of Blood Bowl, the opposing players begin with several players facing off on the center line which leads to a blood bath from the beginning as they attempt to knock each other down to make space for a play. In 7s, due to the shortened pitch, there is a six square gap between the front line of each team. This creates an interesting tactical change as you will likely only be able to hit one of the opposing players on your first turn with a blitz move.

So I came last in the tournament, but I didn’t mind because I had a lot of fun and met some really lovely characters during the day. I also didn’t leave empty-handed as all participants got a cool Blood Bowl key ring to take away with them!

Maybe it’s the intimate nature of the place, with it being relatively small. Maybe it’s the focus on war gaming which draws a particularly committed crowd. But I would say, probably, it is Mark’s welcoming nature and openness to new clientele and new players which brings people in and keeps them coming back!

So, if you’re ever in the Street area, I would definitely recommend checking out The Geeky Gamer! Just pop in for a cup of tea or check out their Facebook page for upcoming events.

Visit The Geeky Gamer website to find out more!

If you’re ever in the Croydon area, check out The Ludoquist board games cafe! 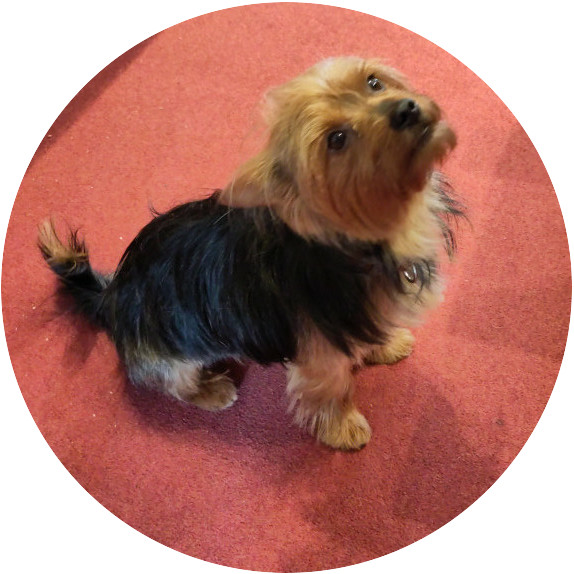 Or if you’re nearer to Cardiff, check out my post on the Firestorm Games store and cafe!

Let me know if the comments below if you’ve ever been to The Geeky Gamer or what your favorite board games cafe is!