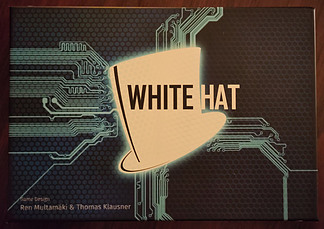 Welcome to my review of White Hat, the new trick-taking game from Dragon Dawn Productions.

White Hat is a novel interpretation of the trick-taking mechanism which really makes you think about your tactics!

Check out my previous review of Tolerance, another unique trick-taking game, also from Dragon Dawn Productions!

Dragon Dawn Productions have done it again! Another awesome game with a really cool theme!

In White Hat you play as hackers testing the security on a series of servers, attempting to reach the Critical Assets. On the face of it, it is a simple trick-taking game, but there are so many twists and turns in the mechanics of the game that you are constantly kept on your toes!

The artwork is lush! The simple iconography, cool images and funky colour scheme really set the right tone for the game. Each card has images which speak of the high-tech subterfuge you are engaging in. They also contain amusing flavor text relevant to various scams and tropes to do with hacking. 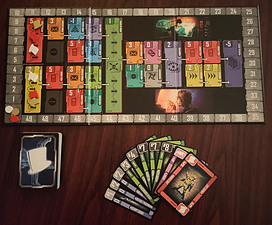 Each player takes two hat tokens of the same colour to represent their movement through the series of servers which lead to the Critical Assets. One of your hats begins in the Internet Cafe and the other in the Public Server. Each time you win a trick you will be able to advance one of your hats through the sequence of servers towards the Critical Assets.

The deck consists of 78 cards ranked 1-13, with 6 of each rank. There are also five Jokers which can be played with cards of another rank to represent any number, or played on their own to count as rank 14.

At the end of each round, which occurs when at least one player has run out of cards, points are scored. This is the first mechanism which is a twist on the traditional trick-taking idea because you are looking to accrue the least amount of points. Points are called Tracer Points as they represent how much of a trace you are leaving in the system. The best hackers leave the smallest trace, so you want to earn the fewest points possible.

Points are scored from the cards in your hand, with higher cards worth more points, and also from the position your tokens are in on the board. Each position assigns you a certain number of points, so one needs to be strategic in order to maneuver oneself into the best positions.

There is one special card which is always in the hand of one of the players, the White Hat card. The White Hat behaves just like a Joker except that when the White Hat is played it switches the trick, making the lowest card(s) win instead of the highest. This is the second way in which traditional trick-taking is turned on its head!

This mechanic brings a lot of uncertainty into the game as you cannot guarantee that a high play will win you the trick. It means that you always have your eye on the player with the White Hat as until that player has laid their cards down, you don’t know if high cards win or low!

This is tricky because not only do more cards mean more points, but the White hat itself is worth a whopping 5 Tracer Points, and remember, we want to have the least number of points at the end of the game to win! The White Hat card brings a dynamic to the game which makes every trick feel fresh, you will be second guessing your opponents and trying to be as tactical with the White Hat as possible.

Having a game board is also quite unusual for a trick-taking game and the designers have really thought about how the trick element interfaces with the board. As you win tricks you will be moving through the spaces towards the Critical Assets, trying to win tricks at the right time in order to progress to the spaces you want.

There are a number of spaces which have no extra function, but just award you different numbers of Tracer Points. Cell Phones give you five points, Email Accounts three, Routers two and Root Access minus one. Only one token can occupy a space at any one time, so you can jump over an occupied space to the next space. This means that spaces with low Tracer Points are in demand and players compete to finish the round on them.

Other Spaces have special functions as well. The Critical Assets trigger the end of the game when a token lands there and

awards minus five points. The Denial-of-Service space locks the token that landed there so they are unable to move but that player then moves on other players token back to the start of the board.

The Honeypot also locks a token down in that space. The Exploit space allows the player to place a +1 or -1 token on any space to modify the number of Tracer Points that space awards.

The game ends when one player’s token reaches the Critical Assets or when all player hats have no legal move. At this point end of round scoring happens for the last time and the player with the lowest score wins. 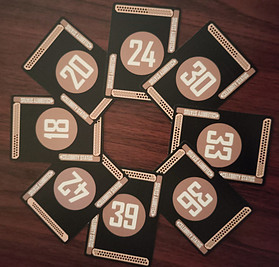 Having played a number of Dragon Dawn games now, I know that variations are something that they do really well and White Hat is no different! There is a two-player variant where two players will play off against a Robot player controlled by one or other player

There is a solo variant, where, again, there is a Robot player. In the Solo version, you are trying to score the highest number of Tracer Points.

The optional Tracer rule brings in a chase element as anyone entering the FBI space will trigger the tracer which then chases down the other players’ tokens and if it catches up with them, they are sent to Tracer Jail and are out of the game.

With the Celebrity Status variant, each player secretly draws a card which has a target number of Tracer Points on it. This represents the amount of fame that the hacker is comfortable with. Players then compete to see who can get closest to their target number. 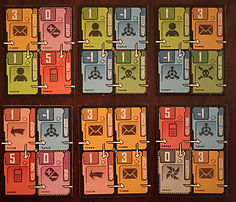 for the board each time. This makes each game feel fresh as the combination of spaces will be different, and therefore the optimal route through the maze of servers will change.

I really enjoyed White Hat! The designers have taken the traditional trick-taking mechanic and spiced it up with a number of twists which make it both highly amusing and very tactical. The tables can turn rapidly round to round and battling with the other players to make sure you don’t end up with the White Hat at the end is super fun and often hilarious!

One thing I love about Dragon Dawn Productions is how deep and well-developed their themes are. Each new game has a rich thematic element and the designers really go to town on developing the theme and tying it into both the mechanics of the game and the artwork.

White Hat might be a good game to introduce to someone who is familiar with traditional trick-taking games such as bridge or whist but who is looking for something a bit different. Or your tech-geek friends who are new to board games might enjoy this as the theme will be familiar to them.

I also love that there is a solo variant and also that you can play with up to six players, as a lot of games have a four or five player limit.

White Hat can be fairly thinky as, in order to do well, you need to be strategic, but it is also a lot of fun and very interactive and sociable. Great for a family board games night or to play with your regular gaming group!

Let me know if the comments if you’ve played White Hat and what you thought of it, or tell us your favorite Trick-taking game.

Check out Tolerance which is a work in progress from Dragon Dawn Productions which I reviewed recently. 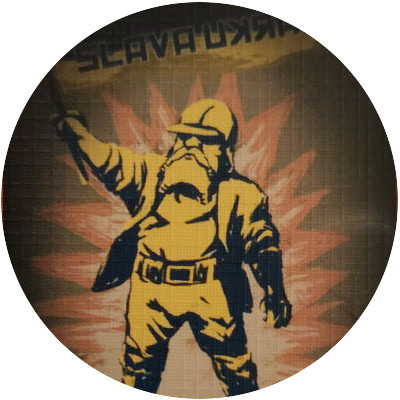 And as always, thanks for reading and see you again soon!