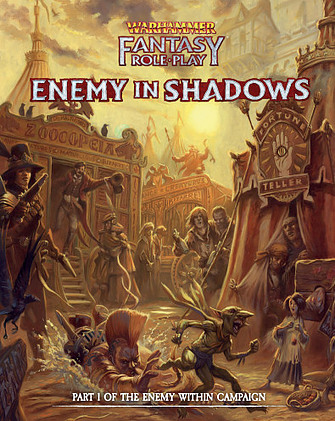 Welcome to my review of the Enemy Within Campaign for Warhammer Fantasy Roleplay (WFRP)!

Find out why The Enemy Within is so iconic and why it is a must for anyone interested in WFRP. Dig a little into the history of the campaign and see what’s new for fourth edition!

Sign up to play The Enemy Within with me in a unique Play-by-Post format, over on Startplaying.games!

The Enemy Within Campaign

The Enemy Within campaign has been running ever since the conception of WFRP in 1986 and has gone through several updates, first by Hogshead Publishing, then for each new edition of WFRP. It is an epic campaign which takes starter characters from their first adventures negotiating the inns and roads of the empire, through a series of adventures with bounty hunters, cultists, demons and goblins and on towards the high-politics of the Empire.

The Campaign is divided into several sections which have been variously renamed and grouped together over the years in different ways, but the basic structure of the adventure has remained constant. The first section is called Mistaken Identity and is an introductory adventure which sows some seeds for future events. Mistaken Identity then leads onto Shadows over Bogenhafen which involves the PCs traveling through the capital city, Altdorf, and heading to a smaller town where the now famous Shaffenfest is taking place.

The Shaffesfest is a notoriously hilarious and entertaining place with lots of silly activities which the PCs can get involved with, but there are more sinister things afoot in Bogenhafen and the PCs need to deal with them! The next adventure is Death on The Reik which is a slightly more open-world adventure where the PCs find themselves rising up the socioeconomic food chain somewhat, with command of their own boat, and several leads to follow to try to track down the source of evil plots.

Part 3 is called Power Behind the Throne and sees the PCs travel to the big fortress town of Middenheim and things start to get a bit more political. In part 4, The Horned Rat, the PCs must battle the dreaded Skaven and in the final Part Empire in Ruins, a civil war is about to tear the fabric of society apart and it’s up to the PCs to save the day!

Click here for my full review of Warhammer Fantasy Roleplay!

The History of the Campaign 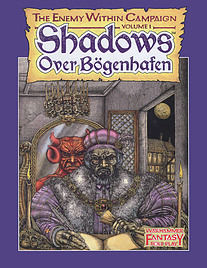 Since 1986, the campaign has gone through no less than 6 iterations with each one slightly changing how the adventures are grouped or what they are called, so there can be some confusion over the exact sequence. The original three sections, Mistaken Identity, Shadows over Bogenhaffen and Death on the Reik have remained pretty much consistent throughout, although, the first two sections have been combined into a single volume called Enemy in Shadows.

Power Behind the Throne was, briefly called The City of Chaos, but holds its place in the latest iteration, whereas there used to be a module called Something Rotten in Kislev. This adventure was not considered a good fit, so has been replaced with The Horned Rat.

The final part used to be called Empire in Flames, but it has been re-written for the new edition as Empire in Ruins as it had been felt that the original finale was not as high quality as it should be. What’s great about the new versions from Cubicle 7 is that Graeme Davis has been heavily involved in the re-writes and he is one of the original authors and considered by many to be the granddaddy of WFRP!

For a more detailed history of the campaign go visit the awesone AwesomeLiesBlog!

Ever wondered how Play-by-Post RPGs work? Click here to find out! 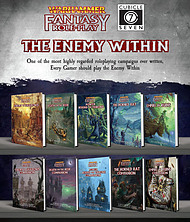 The new series of books from Cubicle 7 are very high quality! Full colour hard backs for each module in the adventure with gorgeous illustrations throughout. And each one comes with an additional ‘companion’ volume full of extra rules, locations, NPCs, plot hooks and more detailed information about the world to help a GM bring the campaign to life.

For the die-hard fans there are special collectors editions as well. These come at a high price, but are really beautiful products to have on the shelf if you are an aficionado!

Read about my original criminal gang for WFRP – The Wasserratens!

Each book is also available as a PDF which is great for those of us who run online games as you can snip the characters, maps and images directly from the book an insert them into your favorite virtual tabletop (VTT). In fact, if you are going to run The Enemy Within, I would highly recommend using Foundry VTT as you are able to purchase each of the books as a Foundry module.

These high-quality modules come pre-loaded with a whole bundle of maps, tokens and handouts for you to seamlessly insert into your game. Foundry also has a WFRP 4e module which will handle the dice rolls and various game mechanics as well to take the stress out of the maths as you play.

Check out my review of the new WFRP card game – Elector Counts! 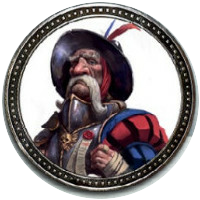 ‘Grognard’ is a term referring to seasoned veterans of the Warhammer world and the new Cubicle 7 productions have really considered this demographic when compiling the books. Each book has plenty of ‘Grognard Boxes’ which offer alternative ways of using the scenarios and NPCs in order to catch out any players who are familiar with the original adventures, or just to spice things up a little.

These suggestions are a great way to make sure that no two games of The Enemy Within will be the same and it means that if you are veteran, then there will still be good reasons to play again using the new 4e rules. Each section has Plot Hook boxes as well which offer ideas for side quests that your players might like to pursue alongside the main campaign.

Check out my review of the new Sci-Fantasy RPG, Veil of the Void! 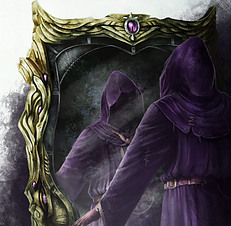 The Enemy Within really is iconic. It emerged at a time when the roleplaying community was just beginning to tire of the standard dungeon-crawler module and it caught the zeitgeist of a new form of city-based adventures. Warhammer, with its brutal combat system and rich lore lends itself to investigative mysteries over meat-grinder adventures and The Enemy Within has plenty of mystery, intrigue, horror and comedy, as well as the opportunity to bash some monsters and foil the well-laid plans of evil cultists!

If you have never played WFRP before, check out my introductory review here!

And if you fancy playing The Enemy Within in a unique Play-by-Post format, pop over to my Startplaying.games page to sign up!

Or come and play in my unique homebrew PbP WFRP campaign, Something Afoot in Uckrofort!

If you’re not sure about Play-by-Post games, check out my article on why PbP is awesome!

Check out my homebrew criminal gang for WFRP that I’ve written about here! 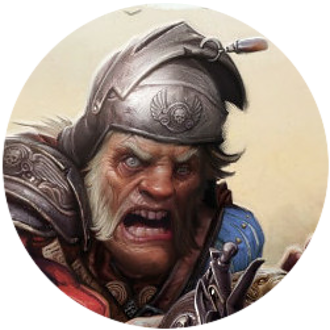 And check out my review of the WFRP card-game Elector Counts!

Let me know in the comments below if you’ve played The Enemy Within and what you thought of it!